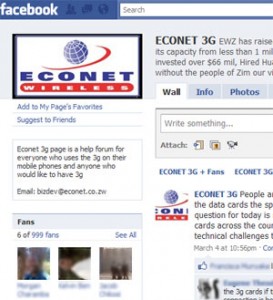 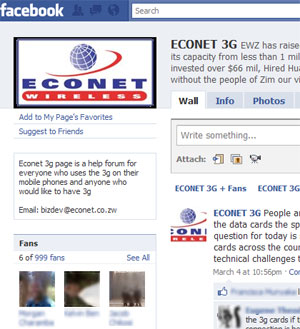 Econet Wireless Zimbabwe is among the few companies in Zimbabwe to embrace online social media. The company’s 3G Facebook page has about a thousand fans and it gets updated several times a week.

For subscribers, this provides an always available face of the company on the Internet. You can have conversation with an Econet techie right there, and he (or she hey) speaks informally and is frank on the issues that matter to subscribers. The kind of way you’d converse with a real person in real life. This as opposed to the call center agents that always make me feel handled. And for Econet, this is a great way to get honest feedback from customers.

Last week ended with some negative feedback for the Econet. They had posed the following question to their ‘fans’:

People are angry that they can’t access 3g data cards or if they have the data cards the speeds are too slow. EWZ say that th service will improve. The question for today is should EWZ have waited until they could give everyone 3g data cards across the country or did it do the right thing by rolling it out despite the …technical challenges that still need to be sorted? Have your say NOW!

At the time of writing this article, the Econet post had been responded to about 18 times, and fans are clearly not amused. Nobody answered the question directly though.

The first 2 responses were,

well what’s the use advertising the 3g cards if they not available? I think having the slower connection is better than not having the connection at all.

but EWZ yu are making millions and they is no justifiable reasn y yu cnt improve connection speed and make the 3g cards availble ,i thk yu jst nd a serious competitor 2 jack yu up

The demand is far out waying capacity and the advertising is not just for selling. Its also a public relations tool. Hw many Zimbabweans knew about 3g before the adverts? In a bid to advocate for change the 1st mover always prioritizes awareness before profit-iring. We promised end of March to have 200 base stations installed. We are still on target for that. You will be watching the world cup games from live streaming sites on your phone by June!

Another unhappy subscriber quickly shot back

as a service provider yu cannot argue and say hw many pple new abt 3g b4 the adverts,y introduce a product and thn fail 2 meet demand?yu have the financial muscle 2 increase capacity if yu had serious competitors yu wud b singing a different tune

To this, Econet explained how the past ten years have negatively affected operations:

ECONET is a Zimbabwean multi national telecomms company. In our portfolio this time 2 yrs ago EWZ was one of the smallest subsidiaries in our group. We’ve made huge strides since then as u knw, bt we cannot perform miracles. U cannot compare Zim to the rest of the world or even to SA. We are coming from over a decade of economic meltdown… See More, we cannot leap frog our infrastructure to be @ the same level as other nations who have been developing while we were devolving. l am sure you have seen the trenches being dug all over the country (laying cables) rolling out 0912, 0913, 0914, 0915. We know Zimbabweans are eager to reconnect with the rest of the world bt nothing, nothing Tendai hurt us more than seeing our home country lagging behind yet when we lauched 10 years ago we were @ the top. That is why we put out 3g when it was nt perfect, we would rather try and fail than never to try at all. l hope you understand where we are coming from and where we are going.

And another subscriber added:

There is nothing wrong with what EWZ did. People will never accept that something is good. What EWZ only failed to do was anticepate the demand and probably price accordingly to avoid the Excess demand. However it’s heads up to u for keeping the public informed all the way. As long as customers are informed of the situation they will not let you … See Moredown. Don’t do like most and overload the system with clients and end up giving poor service. Keep up the good work.

PS: How about jumping the whole 3G thing and moving to 4G like some countries have done e.g. Tanzania. We don’t always have to lag behind u know. We can jump the technology queue.

Soon after another unhappy subscriber wrote:

I dont even know where to begin first and foremost Econet surely shld ve anticipated tht there was goin to b a huge demand for 3G or data lines secondly the more ppl who demand e services means tht in e long run they will make more money Bulawayo is the 2nd capital city o Zim and the closest city to SA etc bt still there is no 3G,y introduce … See Moresomething that does more damage thn good for instance didnt u run a pilot project which shld ve aided u guys in identifyin the loop holes and problems and how to fix them! As Zimbabweans we r tired of the lip service whn r u goin to make ryt all the so called promises u ve made in the past!It is simply unfair tht u raise our hopes up thn u fail to deliver on the promises u wld ve made!Whn r 3G lines and data lines goin to b available to the general public and not a selective few.The World Cup is 98 days away has Econet adequately positioned itself to fully benefit frm the colossal event by the look me things I doubt it!

And yet another unhappy customer:

@ECONET 3G I must say u r gud at smok screen. Ths is nt realy bout th quality of th service… Its about wat is promisd n wat is given. If EWZ had told us frm th start tht is was givn us 3G, EDGE or wateva name used at lets say 40kbs n they did tht ryt no one wud b complainin ryt nw. Its lyk u get a job n they promis 2 giv u $500 thn at th monthend… See More giv u just $100 n say dont complain at least u gt a job. W ar hungry fo ths so EWZ shud nt promis mo thn it cn give. Th moral her is tht its beta 2 underpromise n then overdeliver thn th opososite. Othrwis w luv EWZ 4 savin us frm th dark ages bt dont lie 2 us eithr

This guy too was not amused:

i’m in Byo & definately feel hard done. a promise is a promise… especially from you. then you keep setting new deadlines & then postponing – soo unprofessional. why supply when you know you dont have the capacity? that’s a rip off isnt it? you need to realise that your promises/ statements have consequences on others.

And this one here just called for the huge billboards to be taken down:

Econet. please take down the BIG bill boards that you put across Harare. you know you cant deliver the stuff, so why advertise it…? murikuda kungotibhowa chete..?

We have to commend the Econet person responding to this for keeping their cool and trying their best to explain issues. At the same time, being a business development person, we hope their responses are in line with the general Econet PR position on 3G queries. Informal conversation on social media platforms like Facebook can easily and unpleasantly slide down the slope. So yes, if they don’t have this already, Econet would do good to come up with a social media policy to guide employees in such circumstances.

Our comment on the question: I have been visiting the Cnr Mazoe and Chitepo Econet service center in Harare since last year November and I’m always told it’s coming the next month. It’s December, then it’s January, then it’s ‘By March’, and now it has moved to ‘end of March’.

If there was enough competition, this would’ve definitely moved faster and managed better. Should they have waited? No. Launching 3G even when they couldn’t deliver it to the whole country was the correct move. What has not been manged so well is open communication to subscribers that full roll-out of 3G services was going to take another 6 months (so far) to happen.

4 thoughts on “Econet Asks: Should We Have Waited Until We Could Give Everyone 3G Or We Did The Right Thing To Launch And Sort Out Issues Later?”