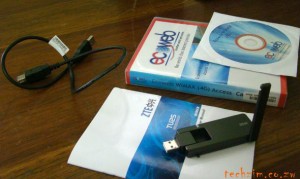 A little more than two weeks ago we got hold of an Ecoweb 4g Mobile WiMax kit. We’ve been using it since.. Long enough to give a fair review. We cut the review up into separate sections so you can jump to the section you want. If you just want a summary of the review, scroll to the end of the post, there’s a brief summary there.

To get yourself up and running, approach an Ecoweb office near you and for $290 you’ll get yourself a modem and a month’s subscription. 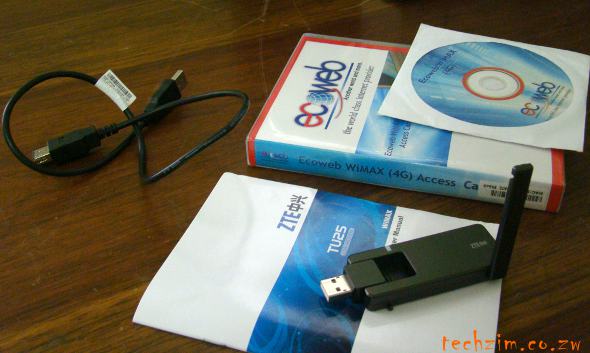 That is a ZTE branded Mobile WiMax modem, a USB extension cable and an Ecoweb branded installation disk. The modem has a small and odd looking antenna which gets in the way sometimes (but can be folded down). 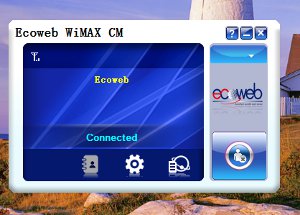 The modem doesn’t take any sim cards. It’s just a modem in the old telephone 56kb dial-up modem sense. To install, you insert the disk and click through the software installation. When it’s done, you insert the modem and let it automatically install its drivers. It’ll turn up a dialog box where you enter your Ecoweb assigned username and password. You’ll basically be up and running in less than 5 minutes. It takes about 2 seconds to connect after you click the connect button. Impressive! Soon as it connects, you’ll get notification that you’re connected to the Ecoweb network at 100mbps.

Network coverage currently spans all Zim cities and most towns. See the coverage map here. A major network expansion project is currently underway and it looks like the intention is to make it as ubiquitous as the Econet mobile phone network. That said you’ll still get small uncovered spots (let’s call them cold-spots) within those covered areas. Small pockets like the Avondale shopping centre. We noticed a few more areas around Harare so, generally, don’t expect an always on experience when you’re on the move.

Sometimes manually searching for the signals like in the picture here will help.

The highest signal strength we got was 3bars on the network meter and we were about 500 meters from a base station. The rest of the time it was just 2 bars. An Ecoweb techie says you’ll rarely get the full 5 bars and that you don’t need to. It’s true. With the 2 bars we still got good internet 90% of the time. In some areas like Eastlea and Adbernie, we got 1 bar but were still able to browse.

Our advice here is to give Ecoweb your exact address and get assurance that you’re covered. If you discover upon getting home that there’s no reception, I’m sure you’ll get your money back without too much hassle.

From your computer to Ecoweb, You’re definitely going to be connected at not less than 100mbps. Just to give an analogy: it’s like connecting to a computer on the same wired network in a building. Key word ‘Wired’. Faster than most Wi-Fi connections today.

Don’t expect though to be connected 100mbps to the Internet. It simply won’t happen and that’s not just an Ecoweb or Zimbabwe thing. It’s a 4G standard connection up to the base station you’re connected to. Beyond that there are too many variables out of your (and Ecoweb’s) control to guarantee you anything.

In fact, when your internet traffic gets to Ecoweb, you’re probably lumped onto the same satellite pipe with other Ecoweb international traffic services. There’s nothing out of the ordinary here; there’s always a bottleneck upstream.

You’ll find therefore that working (or playing for most of you) on international sites is not as good as the local ones. And like typical lumped services, the speed gets better at night when most of Zimbabwe goes to sleep.

By stability here we mean the length of time the connection will stay up for a given number of hours. The answer to that is: very stable. Once you get a signal, you’ll stay connected so long it’ll start feeling like you are on a local network connection. We noticed even power blackouts don’t affect it. Obviously we speak for the areas we tested, which is the greater part of Harare.

In the two weeks we used it, it did go down a few times but the ‘downtime’ was so short it was hardly an inconvenience.

For Techzim guys it comes very close to defining what broadband should be. We’d mislead you to say pages open in a snap. They don’t. Examples will say it better: a heavy Gmail inbox opens in about 5 seconds, local sites like Zimbabwe classifieds and the local newspapers open in about 2 seconds, Facebook in 2 – 3 seconds, the BBC in 4 seconds. Get the picture?

Voice is also doable without too much hassle. Skype, Gtalk and the like are all great even in the afternoons at peak traffic. Better voice quality at night when your UK based brother calls to say you how much he misses home.

Video wasn’t as good as Voice, understandably. It’s hard to maintain a constant Skype Video chat during the day. At night you can do a video conversation but you’ll have to be content with a fuzzy experience.

Streaming video off sites like YouTube is also not a smooth experience. Expect to get 20 second buffering pauses for every 15 seconds of video you watch. Gets better at night with about 10 buffering and 15 seconds play.

Downloads were not a disappointment at all. We downloaded 750MB in about 3 hours at night. You’ll probably do half that in the same time during the day.

When Ecoweb launched the service, our feeling was that the service is priced beyond the average earner. We still think so. To cut Ecoweb some slack here though, the reality is, if you’re a heavy internet user or just a business user and want reliable internet, this might actually be your best Internet deal in Zimbabwe. First, because you do get great Internet, and second, it’s unlimited traffic for the price you pay.

Ecoweb sales persons say they‘re tying this service to their modems. As in mobile WiMax modems sold by Ecoweb only. Apparently they won’t sell to a guy that already has his modem. We know this will change eventually. Remember this is how 3G started; with an overpriced priced modem sold only by the service provider and some recommended ‘agents’. You can be part of the change by sourcing your own modem and preparing for a lengthy argument you will win.

Here’s an identical WiMax modem we found on 4ginfo.com in the US. At US$60, it costs just 35% of the Ecoweb one. Factor in your shipment and other getting-it-here costs and it still won’t get close to the US$175 Ecoweb is charging.

Linux and Mac users are either not going to like this at all or they’ll take pleasure in the challenge. The Ecoweb sold WiMax modem only supports Microsoft Windows systems, XP going up.

I’m no Linux hacker and I’d chosen this past week to migrate to Ubuntu 10.4 so this was a major frustration and setback for me. If someone develops or stumbles upon some Linux or Mac drivers, please let us know in the comments below. Better still if you can find you own WiMax receiver that has Mac or Linux support, let us know. Ecoweb says they’re working on it. It sounded like the kind of ‘working on it’ where you’re just handled politely to back you down.

This is reliable, stable and significantly fast internet. The small annoyance is the uncovered cold-spots. The local internet speed is great. The international not as great but that’s set to improve. Why? Because Econet (Through subsidiaries Ecoweb and Liquid) is laying a 4,500km fibre cable connecting to a Seacom cable in Beitbridge. So if anything, the speed is set to improve. Still there’s no telling how Ecoweb will play this in the next several months. It’s still possible for the service to get oversubscribed (and become slow) like Econet’s 3G did.

If the kind of business you do on the internet requires you to always be connected wherever you are, by all means buy this service. You will not regret it. A flat $100 per month for the stability and reliability we experienced is a good bargain. We’d expect IT departments to buy the service for employees that travel around the country a lot and for executives that need an always on internet connection. It’s a great deal for business.

If your internet browsing is just for social purposes and you have the $100 to spend a month, hey, you won’t be disappointed at all. If you can’t spare a $100, there are still cheaper options out there like the Econet 3G (only available on the black market for now though). You won’t get as much convenience and speed obviously.

Ecoweb’s Mobile WiMax offers genuine 4G standards between users and Ecoweb’s final node in Zimbabwe. That alone is a great feat. The downside is that Zimbabwe still has low capacity on outgoing internet pipes, so your internet traffic will be throttled when it leaves Zimbabwe, regardless of your perfect local 4G connection. But hey guys, pause here a second and take this in: We have a genuine 4G network here and all the cities and most towns are covered.

Like we have said before, the modem is still way overpriced; it’ll definitely come down in the next few months so a little patience will help. Gadget shops around the country will start importing them in boat loads from the east. A few have already started showing up in Harare, like this one on the Webdev classifieds.

We’d love to know your experiences in the comments section below.