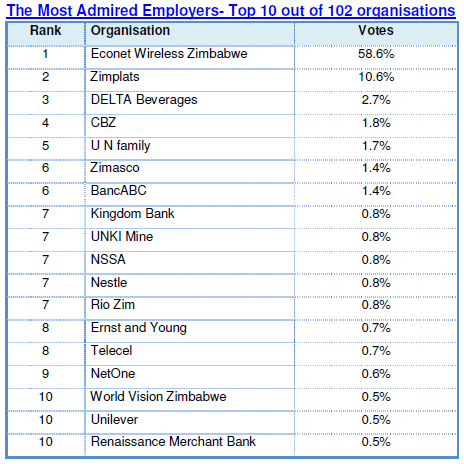 In a survey conducted by human resources consultancy firm, Industrial Psychology Consultants (IPC), Econet Wireless has emerged the most admired employer in Zimbabwe. Telecel and NetOne also made it into the top 10 at positions 8 and 9 respectively.

Of the 850 survey respondents, 58% say they would not hesitate to join Econet if presented with the opportunity. Number two most liked employer is platinum mining company, Zimplats, with just 10% of the respondents. An indication people really love the Econet. Third, fourth and fifth place belong to Delta beverages (2%), CBZ (1%) and the United Nations (1%) respectively.

The respondents basically say they admire Econet for its generous pay cheques. How generous they are, we really don’t know, but the mobile giant recently posted more than US$ 100m in annual after tax profits and paid out US$ 10 million in dividends just last week. Opportunity for growth was the second highest reason for the respondents’ love for Econet.

Of course, with Zimbabwe’s estimated population at 12 million, a sample of just 850 Zimbabweans (already on an IPC mail list) might be considered not fair representation of the wider employable population. It is undeniable though that based on remuneration, career growth and other factors, Econet has generally been considered a ‘good’ employer in Zimbabwe.

It’l be interesting to hear your thoughts on this one. What company (ICT or not) would you really love to join right now? Why them? Please let us know in the comments section below.

The survey results were made public on the IPC website and you can download a copy here.