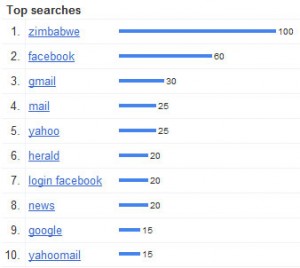 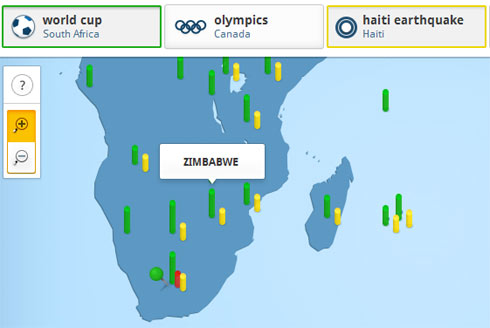 Today, Google posted this year’s Zeitgeist, an interactive visual gadget showing what the world searched on Google in 2010. Google’s version of the world’s list of 2010’s most trending topics. We should be getting a Twitter one and possibly a Facebook one as well before the year closes.

On this year’s top global events list is the World Cup, the Olympics, the earthquake in Haiti, the oil spill in the Gulf of Mexico, and the Iceland ash cloud. Somehow I thought Wikileaks(or Cablegate) would be more popular than that ash cloud thingy. No?

Anyway, according to Google, of the 5 global events, Zimbabweans only searched on the World Cup and the Haiti earthquake. We didn’t care much about the oil spill, the Olympics or the ash cloud in Iceland. No surprises here for me. 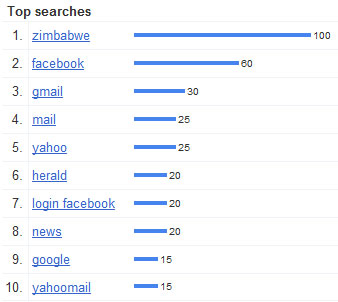 Now onto Zimbabwe’s own top searches on Google this year, a lot has changed from last year. Well, a lot except our country’s name is still the top search term, followed by “facebook”. One big positive jump is “Gmail”. The web email service was the 7th most popular search term on Google last year, it jumped up to number 3 this year. Yahoo on the other hand, which was sitting at 3 last year has been knocked down to 5. Again, no surprises here.

Another interesting change is the popularity of the term “herald”, Zimbabwe’s state owned daily. The Herald  was the 4th most popular search term in 2009. This year, that position’s been taken by the term “mail”, which, naturally, on Google points to Gmail. The Herald is down to number 6.

The term “lyrics” which strangely appeared on last year’s list at number 9, is off the top 10 list this year. Must mean older people are starting to use the Internet.

As for 2010’s rising searches, the World Cup is obviously at the top. Other interesting rising search terms include, “love”, “cars” and “bible”. 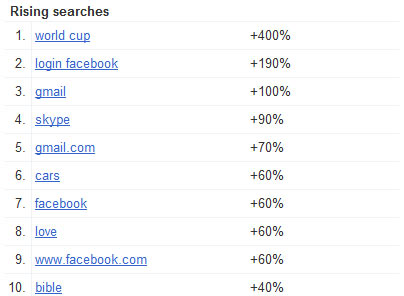 Not sure what to make of this. Please assist explaining this in the comments below; Why they love for love, cars and the bible? Why that mix?