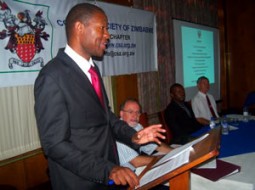 This week, the Computer Society of Zimbabwe (CSZ) held its Annual General Meeting in Harare. At the meeting the CSZ president presented a report of the societies activities for the past 18 months. The society’s treasurer also presented his financial report.

It was announced at the event that the 2009 -2010 CSZ president, Atwell Mukusha, has been reelected for another term. The vice president of the society is now Lee Taaziva, an IT expert currently working for Old Mutual.

In his report Atwell Mukusha introduced the attendees to what the society stands for and how it is involved in some national forums (‘fora’ for some of you) and bodies like the National Economic Consultative Forum, Zimbabwe Institute of Engineers, National Manpower Advisory Council and the Standards Association of Zimbabwe.

The president also highlighted that the society, in 2010, staged its annual Summer School event successfully and participated in the ICT Africa exhibition organized by the Computer Suppliers Association of Zimbabwe.

For his part, the treasurer presented what the society collected in membership fees and how much was spent in the year. Your typical not -profit brief accounts. In response to the report, an attending member pointed out that the society needs to relook at the funding model and try to reduce dependency on the ICDL. To explain here, Zimbabwe’s ICDL foundation hosts the CSZ’s secretariat; most if not all of the CSZ’s day to day operations are done by ICDL employees.

One thing notable at the AGM was that only a few people attended it. We were really just a handful. Look at the picture below just to have an idea of how small the group was. Of the hundreds of CSZ members in Harare, only a few chose to attend the AGM.

9 thoughts on “The Computer Society of Zimbabwe holds its AGM”