Today, Econet launched a new contract (post-paid) package for mobile subscribers where, if a customer has a minimum salary of US $250, they can get a free mobile phone on contract. We contacted Econet for details of new mobile plan and got some interesting facts you’ll want consider if you’re thinking of getting yourself a contract ‘free’ mobile phone. 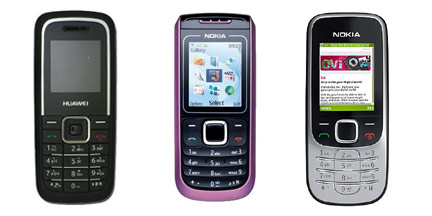 Basically these are feature phones. Don’t expect any fancy smartphone functionality. Without a contract Econet sells the Huawei G2200C and Nokia 1680 for US $24 and US $54 respectively

So which phone do you get for what?

The plan sounds reasonably fair until you ask about the walk out penalty. The Econet sales person we asked for details told us walking out of the contract before expiry date would attract a penalty equivalent to the monthly fee multiplied by the number of months left in the contract.

Considering the Huawei G2200C and Nokia 1680 cost $24 and $54 respectively when buying them off the shelve (without a contract) for me the contract walk out penalty is a deal breaker here. Say for example I have the Nokia 1680 plan which requires me to pay US $30 monthly and I decide to walk out of the contract 6 months before it expires; why would I want to be charged US $180 for a $54 Nokia phone I’ve used for a year and half already.

UPDATE: We had contacted Econet PR earlier to have them confirm what the Econet Sales person at the Econet shop in Harare was telling us. Here’s the explanation we got: if you decide to walk out of the contract,

The payment will be calculated using the straight line reduction, that is handset value over the 24 months contract tenure. say,  for instance, a customer terminates after six months, the amount payable will be calculated to cover the remaining eighteen months as follows: 18/24 x Initial Handset Value. Remember, the handset is given to you free. There is, again, no obligation to pay off the contract, but only the free handset.

So, it does turn out the sales person was wrong. This is worrying as we visited this particular person twice today and on both occasions they gave us the same facts. We even recorded the second conversation and got the person’s name.