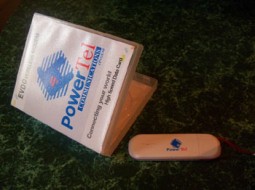 Two weeks ago, Techzim got the opportunity to test the PowerTel mobile broadband service. We’ve been using the connection as a primary for one of our laptops at the office, taking it through the paces and below is what we think about it.

The review is in sections, so feel free to jump to a section you’re interested in if you don’t want to read the whole review. At the bottom, we conclude with some final remarks and our thoughts on the service.

Like most mobile broadband services in Zim, PowerTel’s comes tied to the modem, i.e. you have to buy the modem plus the service from PowerTel. The modem costs USD $60 and comes with a 3G EVDO SIM card inside. That US$60 tag is about average in comparison to other services locally as well as globally.

The mobile broadband service itself also has a good price by Zimbabwe standards: US $50 per month for uncapped bandwidth. Uncapped here means if you pay the US $50, you can download (and upload) as much data as you want without worrying about using up bundles. So far therefore, price wise, the PowerTel is one of the most affordable.

Setup (on Microsoft Windows) is quite straightforward. You plug the modem into a USB port and let the installation program start. After that you click a few “next” buttons, a “finish” button and you’re all set to browse. 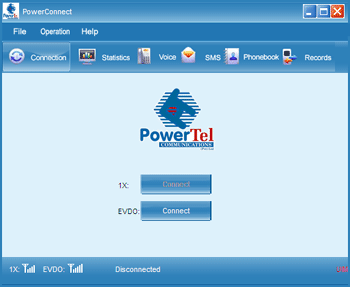 If you’re not sure how to do this (click a couple of buttons i.e. ) the folks at PowerTel can set it up for you and explain the process while they’re at it. Either way, you’ll be connected in less than 5 minutes of unpacking your modem.

The connection speed is not disappointing. You can open web pages and browse the internet at decent speeds, i.e. without waiting too long for pages to load. International web applications like Gmail, Econet Mail and others take about 30 seconds to load. Facebook, of course about a quarter of that.

Loading local sites was surprisingly not any faster, leading us to suspect PowerTel’s mobile broadband (or part of it) is running on some VSATs upstream or some other international platform. Speed tests below also suggest the same thing.

File download was a bit of a disappointment. Downloading an 80 megabyte anti-virus update file from the McAfee servers for example took about 1 hour during peak browsing time. We did single thread downloads using a basic Chrome browser for this. Optimized multithreaded downloading would probably take a little less.  Again, downloading from a local site wasn’t any faster; a 20MB file on ZOL servers for example lasted a painful 40 minutes to download.

In terms of upload, attaching a 0.2MB file to Gmail during peak time took about a minute. Attaching a 2MB file failed completely though, despite several tries.

Midnight browsing was the pleasurable experience we expected. Web pages with heavy applications would open in just a couple of seconds. 5 seconds or so tops. File download also improved significantly; downloading an 87MB McAfee update file took a little more than 50 minutes. Streaming a YouTube video was the smooth experience it’s supposed to be.

Again, not much difference between international and local performance. The figures kept changing though and trying to get a meaningful average was such a task.

We did a broadband speed analysis with Ookla’s speedtest.net during peak time and below are two screenshots of the results. The first is a download/upload test on local servers (ZOL in Harare) and the second, International server in the UK. On the upper left corner of the images is the estimate time one should expect to wait downloading a music file, a video file, or a full movie. 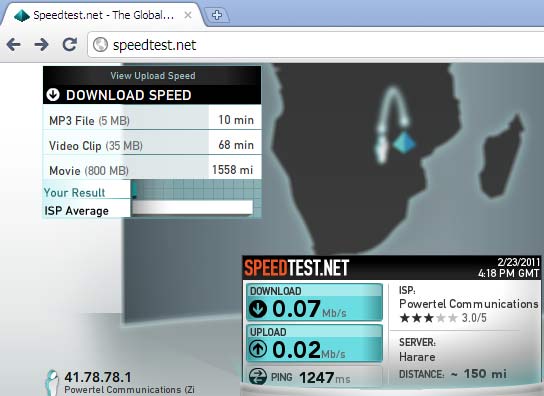 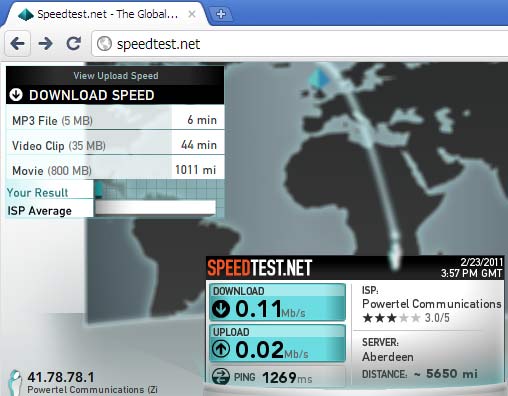 Stability wise, the connection is less than satisfactory. In fact at times it’s downright disappointing.  The day we got the modem, and few days after that, we were very concerned with the frequent downtimes and almost got to a point where we thought maybe we could just let them fix it and review some weeks later. To be fair however, it’s been improving since. The service we’re getting today is a lot better than that of two weeks ago and you get the feeling there are people actively working to make things better. Still, PowerTel’s mobile broadband has been on the market for years, it’s not too much to expect them to have a solid network by now.

Anyway, our experience overall was availability of about 80%. It is a problem especially during the day. The connection slows down significantly for a few minutes after every 2 or so of good browsing. Sometimes you can go for longer without experiencing any slowdown. Sometime is does get bad. Bad to the tune of as many as 5, 3 minute slowdowns in 2 hours. It’s really hard to predict how it’s going to perform on any given day. And needless to say, if you’re doing some important work online, this can be frustrating. It pushes you to need a backup connection.

Our conclusion is that the service is usable but PowerTel needs to give a bit more tweaking. We were particularly disappointed with the slowdowns during the day. It would get in the way so much sometimes we just ended up switching to another provider. We feel that it will disappoint any customer expecting to just buy and connect to the web without any hitches.

But the service also performed well enough to be suitable for some groups of users for whom stability is not a critical requirement. The type of user who can postpone their web browsing if the connection slows down.

And like I said, at uncapped US $50 a month, this actually is a very attractive deal compared to other offers on the market. With the current price tag, if PowerTel’s broadband performed without any significant slowdowns, it would be by far the best mobile broadband deal in Zimbabwe. But that is obviously not the case.