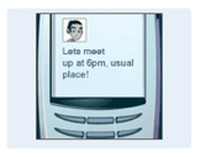 Google has announced through its Google Africa blog that it has launched Gmail SMS in Uganda, Tanzania and Malawi. In Uganda Google is working with MTN, Uganda Telecom and Orange, in Tanzania with Vodacom and in Malawi with Airtel and TNM. Gmail SMS has been around for some time in Africa. The service is currently supported in Kenya, Nigeria, Ghana, Senegal and Zambia.

It’s really somewhat similar to what ForgetMeNot Africa and Econet are doing on the Econet network locally with eTXT. The small difference is that Gmail SMS is built into Gmail and you get the clear option to just send an SMS to a mobile subscriber in a supported country. SMSs generated by the eTXT system are originated as a normal email to a mobile number email address like 0772999999@etxt.co.zw or a chat message to the email address.

It’s important to note here though that eTXT is not just about Gmail; in addition to Gmail services eTXT also offers SMS communication with Facebook, Facebook chat, Live Messenger, MSN, Yahoo and other such services

We imagine Telecel and NetOne would do well to see Gmail SMS as an opportunity to offer some kind of chat message to compete against Econet. Or maybe just go ahead and talk to ForgetMeNot Africa and have eTXT implemented on their networks too.