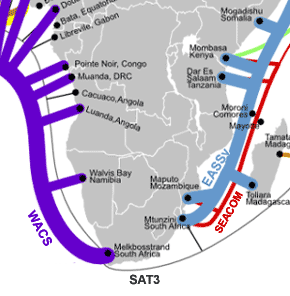 Today, the West African Cable Systems (WACS), arrived at the shores of Cape Town in South Africa. The cable connects to the United Kingdom through the West African coast where it has 11 connection points in the Canary Islands, Cape Verde, Ivory Coast, Ghana, Nigeria, Cameroon, Equatorial Guinea,  Congo, the DRC, Angola and Namibia.

With a total 5.12 Terabits capacity, the cable becomes Africa’s largest cable installed to date. The second largest is the 4.72 Terabit EASSy cable running along Africa’s east coast.  The WACs cable is expected to be launched for commercial use in the first quarter of 2012.

A US$ 600 million project, WACS is owned by a consortium of telecoms firms that include South Africa’s Telkom, Neotel, MTN, Vodacom, Gateway Communications and Broadband Infraco.

The cable becomes the third cable to land in South Africa in less than 2 years. The Seacom cable went live in mid 2009, and EASSy, last year in July. WACS’ landing brings the total international undersea bandwidth capacity on South Africa’s shores to 11.5 Terabits.