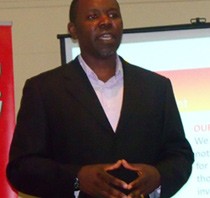 Today, we spent the better part of the morning at the Spiritage network operation center in Harare. We were invited along with a dozen other writers from the various media houses in Zimbabwe to a “pre-launch media briefing” of the business group.

The telecoms side of Spiritage has some of what we’ve written about already here on Techzim. You can read click on the Spiritage tag to read the articles.

First, let me say of all the Zim internet access providers (IAPs) we’ve talked to in recent months, today was the first time we felt we were at a company that’s set to take on the big incumbents head-on and possibly redefine Zimbabwe’s telecoms industry going forward. It’s not that the other 11 licensed IAPs are not doing anything. They are, a lot of great work. Just not at this scale.

To understand more, consider that the company employs inventors. Yes, inventors. The group CEO, Zachary Wazara, revealed that the company actually has a number of inventions in satellite antenna technology, base stations and power generation technologies and is in the process of patenting them. Just thinking about this, you could feel (proudly) that these are not just technologies that will have an enormous impact in Zimbabwe, but that have real potential for application on a global scale to tackle some of the world’s biggest problems.

On the network side of the business, consider that the company has already poured no less than US $25 million into the business and is investing more. Before the network has launched Valley Technologies currently has a core network subscriber capacity of 500,000 and is expanding. Also consider that the cities of Harare, Bulawayo, Mutare and Chitungwiza are all covered and more cities will join as the company prepares to launch.

More, consider that at launch the company will be ready to deliver 3G and 4G connectivity on the network. To sum all this here are the words of the group CEO Zachary Wazara: “There’s no IAP that has a network as extensive as ours. We’ll be so much bigger it will be very difficult for anyone to compete in that area”. And yes, that includes Econet’s Ecoweb, Africom, PowerTel, Aquiva and others.

Through subsidiaries, E-Transact and E-nstant Pay the group also has a mobile banking solution that will be launched soon to compete with other payment and banking solutions already on the market like NetOne’s OneWallet, and Telecel’s Skwama. According to a Spiritage executive in charge of the mobile payments business, the mobile banking system will be bank and mobile network operator neutral. What we saw is the possibility of accessing mobile banking services without being on a specific network or even a bank. A traditional bank guaranteeing the transactions in the background maybe, but not a physical one you interact with to transact.

The CEO also presented on other subsidiaries in the group that will do online stores, deliver media content and sell telecoms accessories.

For those of you interested in the network technologies used on the Valley network, all indications point to TD-SCDMA. We also saw some several references to a Chinese company called Xinwei which we now believe Spiritage is working closely with.  As you may already know, Xinwei Telecom is one of the core developers of China’s home-grown TD-SCDMA 3G standard.

It was all impressive but we were not excited about everything we saw. There are some issues we see as potential deal breakers when the Valley Technologies launches. One clear one is the uncertainty around the issue of interoperatbility of Valley’s voice technologies with the mobile phones that subscribers currently use in Zimbabwe.

Nobody I talked to could say in simple terms if I could use my current GSM mobile phone on the Spiritage network. Investing in a new mobile phone just so one can be on a ‘better’ network is something that most subscribers will put off until a time they are naturally ready to get a new phone. Add to that the issues of number portability (or lack of) in Zimbabwe and you have two factors that can seriously work against the migration of subscribers to the Valley platform.

Zimbabwe is approaching 100% mobile penetration and new customers are mostly those coming from other networks. Migration will not be easy for subscribers unless Valley Technologies’ voice and data tariffs are very very low. As low as the 50%-cheaper rates we saw advertised in the print press some two weeks ago. But it sadly probably won’t be so. The CEO himself confirmed the advertised rates were just a POTRAZ requirement whose cost based determination is not close enough to the state of the network, its size, overall cost and therefore tariffs at launch. In short, the message was: try not to read too much into the advertised tariffs; at launch it might be something totally different. Still a lot cheaper though maybe.

But then again, with the big incumbents (just one actually) doing a great job of frustrating their subscribers, who knows, maybe a lot of subscribers will consider migrating. And if the new technologies are the game changers we think they’ll be, Valley Technologies will raise the bar and force the incumbents to be a bit more responsive to our needs as customers.

Who are the founders and investors in Spiritage? We tried to get the CEO to reveal this information. He definitely is one of the founders but beyond indicating some family trusts and other institutions are the investors he wouldn’t say more.

What do you think? Is Valley Technologies a game changer or the incumbents will still rule.