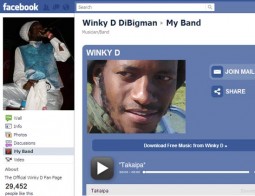 We recently published an editorial highlighting the apparent unpopularity of Twitter locally. As such this post categorises social media in the context of Facebook being the most popular social media tool in the country. For reasons best attributed to uptake and access, we think Facebook is the best gauge to explore this subject.

Winky D shot to stardom in a manner that left many recovering from his mesmerising impact. From the dusty streets of Kambuzuma he has risen to defy all established conventions by taking over local airwaves, entertainment systems, and many an iPod/mp3 player. Before his emergence, Dancehall was a niche genre for Rastafarians and hardcore fanatics; he has not only transformed this but created a very compelling mainstream brand.

For those readers wondering what compelling brands are and the resultant qualification to fall into such a category, simply think of Coca-Cola. You will find it in toughest of ghettos, the glitziest of mansions and just about anywhere else in between. Presidents and tycoons religiously sip it in the same manner as paupers and labourers. While being simplistic in definition, it is not farfetched to liken Winky D’s brand awareness to that of Coke. There is no better assertion of this than the fact that they (Delta/Coca-Cola) have enlisted him to take their brand to the people.

This brand’s equity has ripened with age like wine from the finest vineyards. Corporate titans have tapped into the ‘Ninja’s’ crowd-pulling ability at various events like Hifa, The World Cup Trophy tour in 2009 and an unending list of socialite occasions. Population Services International has even capitalised on this popularity (especially with the youth) by launching a series of radio jingles to promote HIV/AIDS initiatives. At the time of authoring this post, Winky D was preparing for a showdown in America; this is after he left fans in the UK and Australia begging for more earlier this year.

If you find yourself in a position to condemn this post as unwarranted praise, take a moment to digest the number of Facebook likes he has in comparison with other local musicians. In fact let’s compare him with just about any other career segment that begets fame. At the time of publishing this post Winky D had some 29,400 fans on Facebook. Alick Macheso one of the most popular artists in Zimbabwe has less than half that. Oliver Mtukudzi too; has has some 7,800 fans. 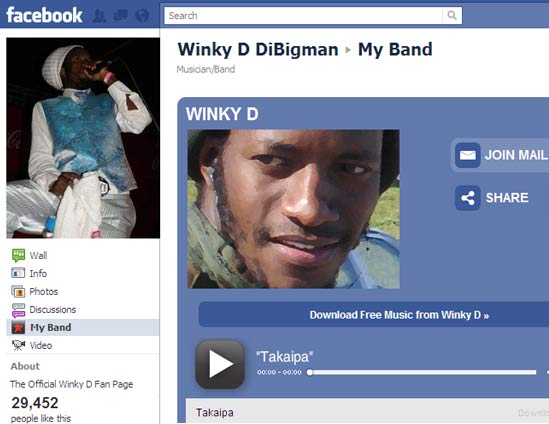 At a time in which brand builders around the continent and greater earth have begun to formally adopt social media as a marketer’s tool, it is sad to point out that Zimbabwe is synonymous by its absence. Winky D has amassed this many fans on the social network because he’s embraced the age he’s in.

Unlike most of the local artists who are trying out Facebook as a business platform, Winky D simply did not create a fan page but crafted it around his target audience. By visiting his fan page you will also have an opportunity to sample his tracks, buy his music and understand the musician better. His savvy approach should be treated as a very important case study for local artists and organisations.

Social Media is not just a phase but has become a part of peoples’ daily lives; if proponents of economic prosperity are serious about their mission then this is a marketing tool they cannot ignore. Zimbabwe’s tourism, consumer brands and resultant employment levels can significantly benefit from effectively using social media to tap into fresh markets. Facebook has more than 500 million active users worldwide, over 80% of key tourism and economic source markets. It can give Zimbabwe access to key decision makers and trend influencers around the world for captivating costs.

Perhaps the time is nigh for professional social media consultants to help our brands emerge from the confines of obscurity. For guidance, look no further than our very own big man; Winky D.

5 thoughts on “Social Media: Winky D is the Big Man”