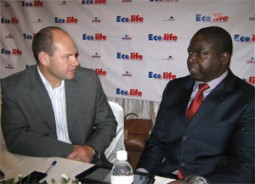 Earlier today, we posted news of yesterday’s Zim high court judgment ordering Econet to restore the Ecolife relationship with Trustco and to “refrain from undertaking and implementing a competing, infringing service” to Trustco’s.

So far, Trustco has announced that it’s business as usual in Zimbabwe for Trustco Mobile. “We are delighted with the ruling and foresee that none of the almost two million subscribers to ‘Ecolife’ will lose any of their accumulated life cover” the Trustco Group Managing Director, Quinton Van Rooyen.

This may not be the case. It’s more of court battles in Zimbabwe it appears.

Econet is taking this to the Supreme Court. They are appealing the judgment. We just received a press release from the Econet. Here’s the full text of the release:

Lawyers for Econet Wireless have said that their client will appeal to the Supreme Court following a ruling by the High Court that said an earlier termination of the agreement by Trustco Mobile was not a proper termination, but an “expression of intention to terminate at a future date”, and therefore was still valid.

In a statement, the lawyers said Econet had argued that Trustco’s letter was not merely an expression of an intention to terminate the agreement.  The letter specifically stated that unless they were paid the disputed amounts, they had suspended their obligations under the agreement and were going to shut down their system on 6 June, the date Econet disconnected the system to avoid inconveniencing its customers.

Thus, Econet had argued that Trustco had repudiated the agreement.

Independent telecoms experts said Econet is a licensed custodian of confidential customer information. It cannot risk that information by giving access to such information to someone in whom it has lost trust.

Whatever happens to that customer data, Econet shall be held to account by the Regulators and by its subscribers.

Commentators referred to the protests raised by subscribers against the unsolicited messages Trustco had been sending to customers and commended Econet for taking customer complaints seriously.

Asked for comment, Mr Tawanda Nyambirai, the Chairman of Econet, said he was out of the country and would only comment after talking to Econet’s lawyer.

Mr Nyambirai explained that he had only taken over argument of the case when Mrs Jill Zindi was taken ill in the middle of argument. However, he confirmed that Econet would appeal to the Supreme Court. He declined to make any further comments.

2 thoughts on “Trustco vs Econet: Econet to appeal order to re-engage Trustco”