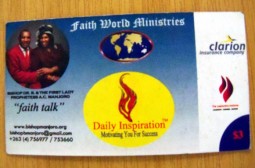 As indicated in the last article we posted on the new “spiritual recharge cards” by a church leader in Harare, there’s some controversy building behind the service. The day after the launch was made, we were contacted by 3 individuals; a team comprising of a developer (James Ndukwane), a motivational speaker (Pascal Nyasha), and an investor (Hillary Chindodo), who basically claimed Makandiwa had stolen their concept.

According to the team, they have developed a Value Added Service (VAS) concept where, instead of getting a short code from a Mobile Network Operator (MNO), they print recharge cards and sell these to the subscribers wishing to register for mobile VAS content. This enables them to receive cash upfront when a subscriber buys the VAS recharge card. To receive the content, a subscriber sends a code on the card to a specified number and gets registered for content worth the value they bought the card for. US $3 for example, will subscribe a user to a month of content delivered once a day via SMS.

The reason for not using MNO supplied short codes has basically been that MNOs are taking the lion’s share of VAS revenue per transaction. One provider for example has been taking as much as 67% of each transaction.

Anyway, the Nyasha team has been targeting churches with the service. They basically approach church leaders and offer them the means to send church content to church members via mobile for a fee. The Nyasha team shares the revenue for each transaction with the church (or the church leader). They told us a whole list of churches that have agreed and will be launching the service in the coming weeks.

Here below for example is a card used by a church called Faith World Ministries. The card, as you may see, is also an advertising platform for companies. On this particular card is a Zim insurance company called Clarion 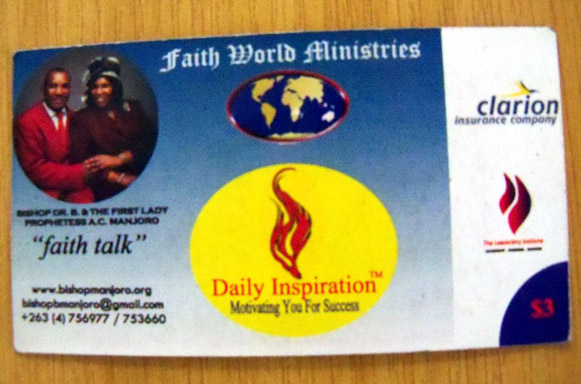 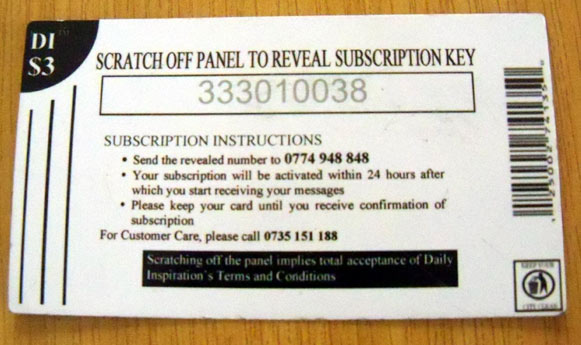 According to the Nyasha team, they presented the idea to Makandiwa and were led to believe the leader was interested and was preparing to use their service. To their surprise however, Makandiwa went on to launch his own version of the service (a more manual one) without them. Here’s Makandiwa’s version of the card: 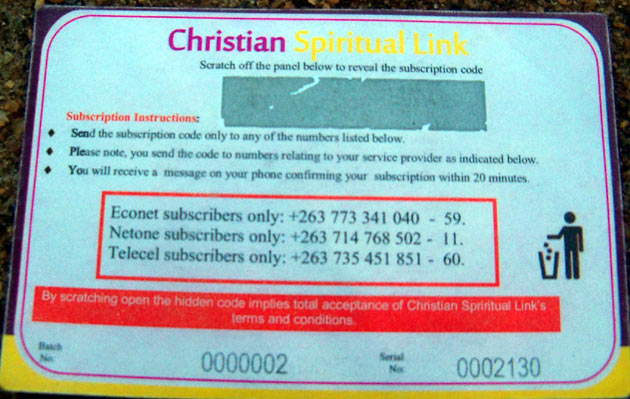 Today’s Herald has details of the lawsuit against the church leader. He’s been slapped with a US$680,000 lawsuit by Nyasha for patrimonial loss and copyright infringement. Nyasha has also filed an urgent chamber application to bar the church leader from continuing with the “Spiritual Link” cards business.

By claiming the idea is theirs, the Nyasha team will obviously attract the attention of Zim’s telecoms regulator. POTRAZ is currently investigating Makandiwa for possible breach of the country’s telecoms regulations, and by extension, this means POTRAZ will be keen to question Nyasha’s team too.