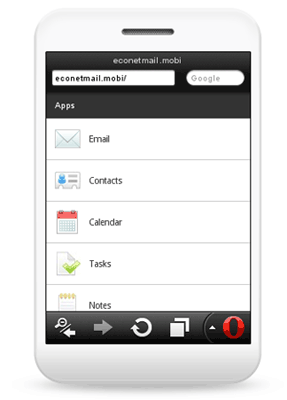 About 3 weeks ago, a contact at Econet informed us that Econet is launching a mobile version of the EconetMail service. The address is econetmail.mobi.  We have since tried out. Our opinion is that it’s not a great product. In fact it’s just not a good product right now. See, the mobile version is just another face to what, at the core, still is a product with issues.

When Econet launched Econet Mail in January this year, our take on it was that unless Econet provided some incentive for subscribers to use it, it wouldn’t make sense for anyone to choose it over, say, Gmail. The incentive we thought was logical was to make all Econetmail.com traffic free for Econet subscribers.

Then, we assumed Econetmail was hosted locally. But exactly a month later, we found out Econet was using a United States hosted Rackspace email product. That took out the local traffic argument and also pointed to the fact that the email service was probably expensive for Econet to provide, and they were not about to incur further costs subsidising broadband for its use.

Resultantly, the uptake wasn’t massive. We don’t have the figures for the Econet Mail subscriber numbers since launch so can’t really say accurately. I can only say, apart from myself, I don’t know another person that uses an econetmail.com address. In fact, even I just use it when I need to check out something about the service, like right now. But that may just be because I, and the people I interact with, are not Econet’s target market for this product. Who knows?

Anyway, eventually Econet bundled EconetMail with eTXT, to give it a boost in usage. Currently, every subscriber registering for an eTXT account also gets an econetmail.com account, which is used for all email they send from SMS to the internet and emails sent to them from the internet. We have no idea how well that worked, and so far, Econet and ForgetMeNotAfrica (the owners of the eTXT system) won’t say.

Add all this to the fact that most people just don’t like their phone numbers as email addresses and you have a situation where Econet might be sitting with a white elephant.

To come back to the new econetmail.mobi system, here are our notes on this specific product front:

That said, the mobile interface may just be a Rackspace mobile application for the hosted email service, and Econet probably doesn’t have much say on bells and whistles.

If you get a chance to try it out, please share in the comments your thoughts on the product?