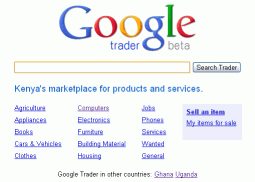 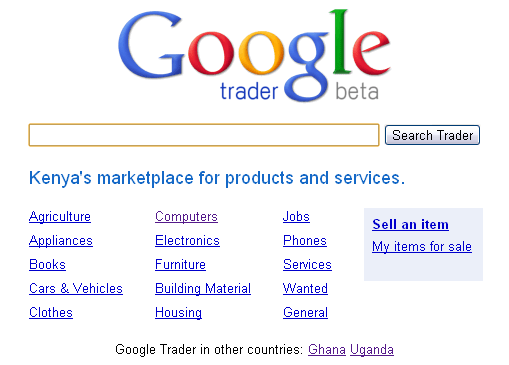 Today, Google announced that it has launched Google Trader, a classifieds service, in Kenya. Here’s the address: google.co.ke/africa/trader. According to a post on the Google Africa blog, thousands of businesses have already posted tens of thousands of classifieds listings on the site and the content is growing.

The Google Trader service is not new in Africa. It’s been launched already in Ghana and Uganda. It was launched in June 2009 in Uganda as an SMS based classifieds service and later extended to the web the same year. Google announced that year that “most mobile devices in Africa only have voice and SMS capabilities, and so we are focusing our technological efforts in that continent on SMS”

Google doesn’t say today if the Kenya implementation will have the SMS version of the service that both Google Trader Uganda and Ghana have. From what we observe, likely not. The Kenya website doesn’t have the SMS instructions that are clearly visible on the Ghana and Uganda sites. We’ll try to find out why.

In Kenya, Google will compete with other online classifieds services like n-soko and Dealfish. n-soko is owned by Nation Media Group, publishers of the Daily Nation, a publication considered Kenya’s most influential newspaper.