We received a tip this morning that the NewsDay website, www.newsday.co.zw, is down. Web browsers currently report that malware (malicious software) has been detected on the site and that visitors are at risk of malware infection if they open the website.

Here’s a screenshot of part of a warning Google Chrome is giving: 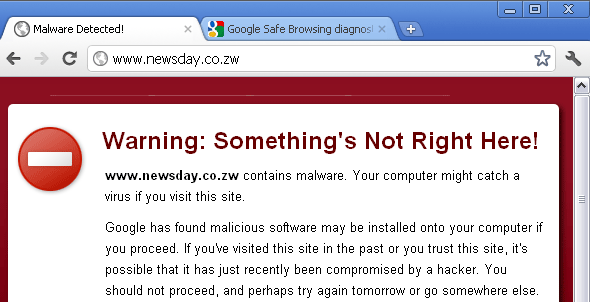 Opening past the warning produces the database error below: 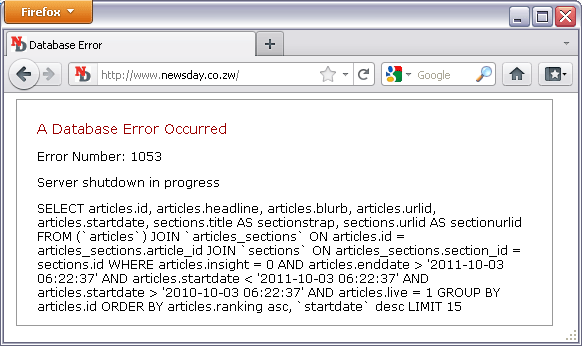 According to a Google diagnostic page, the malware on the NewsDay website was detected yesterday on 3 of 52 pages that the Google crawler tested. It’s not clear yet just how the malware was injected into the website.

NewsDay is the online version of a Zimbabwean daily newspaper by the same name, which is owned by Alpha Media Holdings. The paper is one of the most popular daily newspapers locally.

Alerted to the NewsDay’s compromise, publisher and owner of the paper, Trevor Ncube, has responded on Twitter that he’s following up on the issue. Ncube also publishes South Africa’s Mail & Guardian weekly newspaper, The Zimbabwe Independent and The Sunday Standard.

Incidents of compromise of Zim websites by hackers have been on the increase lately. Just two months ago, the Zimbabwe Stock Exchange website was hacked and used to spread of malware. It was eventually shut down by the hosts, Webdev, and remains down to this day. The NewsDay website is also hosted by Webdev.

Alpha Media We’re reaching out to both Alpha Media Holdings and Webdev for more details.

Dear Newsday readers, Newsday is currently under maintenance due to a hacking attack on our site. We will restore the site as soon as possible.