Webdev, the internet company behind Zimbabwe’s most successful online classifieds will be launching a social networking website in the coming weeks. So far the website is called simply Social but we’re told there may be a change of name. Visiting the website’s address on social.co.zw loads a ‘launching soon’ banner and some points about what the network will be: 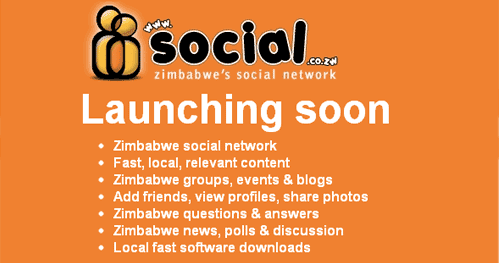 Social was first unveiled at the ZOL Startup Challenge in August this year. At the challenge the platform was pitched as Zimbabwe’s local Facebook. It’s more than a Facebook though. It has news, blogging, a question and answer platform, discussion and software downloads.

We have had an opportunity to use Social and still have access to the testing version that’s not available to the public right now. Unfortunately we promised we wouldn’t speak much about what’s inside until it’s available to the public. The long and short of it is that it’s a social network based on some open source Joomla tools.

The one thing that feels great about the social network is that you know the people on it are all around you somewhere close by. It’s a place you can easily find new friends that you are able to meet in person afterwards, discuss issues that are happening around you, and maybe organize group meet-ups around certain interests.

We feel though WebDev could have used the coming soon page to invite interested users to the closed invite only version.

So far, the website doesn’t have a mobile version, and here Webdev might be making the same mistake they are making with their classifieds website. Ignoring mobile.

In our opinion, any internet application in Zimbabwe not only needs to have a mobile version but would do good to think mobile first. Some startups are even taking it further and thinking mobile only. Tengesa.com for example, recently launched a local classifieds site that’s mobile only. Next door in South Africa, MXit beat global social (and internet communication) networks by working mobile only. Without a mobile version, Webdev is excluding a large group of internet users, or at least making it hard for that group to use Social.

But this may not be a fatal mistake for Webdev. The company has many only advertising platforms to push its products. Outside the widely read online versions of Zimbabwe’s daily newspapers, the Webdev classifieds site is probably the most visited local website in Zimbabwe. Add to that the fact that Webdev’s adverts for their web properties are actually on all those newspaper websites, and Webdev has a very wide platform to push Social it might be difficult to fail where other local Facebooks have come and faded.

20 thoughts on “Webdev to launch a Facebook for Zimbabwe”