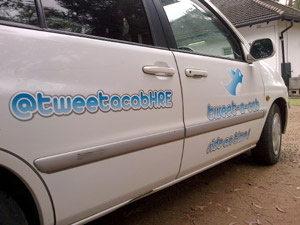 So, how do you currently call for a cab in Harare when you need one? Give the cab driver a call? An SMS? Does it cost you airtime every time to do this? Do you always get a response on time? If you have a smartphone, (or just a regular internet connection at a desktop) there’s a new service in town you might want to give a try. It’s called Tweet-A-Cab.

You guessed right; to get a cab you just Tweet for it!

In what will become Zimbabwe’s most direct use of the realtime microblogging tool for business, a local cab company will use Twitter to get cab requests (and feedback) from clients. The company doesn’t only use Twitter to connect with customers; it has branded its whole business around the Twitter platform’s look. The company is called Tweet-A-Cab and its twitter profile @TweetACabHRE.

So how exactly does it work? To use the service, one has to have a Twitter account and follow the @TweetACabHRE account. TweetACab will follow the user back so that there’s two way direct communication between the two accounts. Now to get a cab the user just needs to send their number in a DM (Tweetese for Direct Message) to the company. TweetACab will then call the user back to arrange the pickup.

We got in touch with the man behind the idea Tawanda Nyagwaya last week to learn more about his new creation. He says since he started using Twitter in 2009, the number of Zimbabweans has noticeably grown on the platform and it struck him the realtime nature of the platform makes it suitable for a service like Tweet-A-Cab.

So far, TweetACab is providing the service for its own fleet of cabs but says depending on the uptake they may open up the platform to other local taxi companies.

The main value proposition, Nyagwaya says, is that this is a new cheap and efficient way of booking a cab because customers don’t incur the cost of phone calls. “With the festive season around the corner, many Twimbos [a moniker for a Tweeting Zimbo] will need taxicab services and we are ready to offer that. In other words, we are ready for #DecemberInZim!” explains Nyagwaya using Twitter’s popular hashtag (the #) method of tagging and categorising content on the platform.

Nyagwaya adds that the business environment for them has become more competitive and that technology was changing the landscape fast. “Social media fits more naturally with this type of business” he says.

TweetACab has only been in operation a little more than a week. Nyagwaya revealed that while the response hasn’t been overwhelming, “it has been good” and they are anticipating some growth. 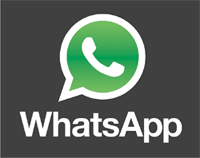 Other options TweetACab provides to their customers to book a cab include the WhatsApp application in addition to traditional phone calls. WhatsApp itself has become a popular application locally with people that have smartphones (and some feature phones). It provides an ultra-cheap SMS experience using the internet. Ultra cheap in the ‘where you used to get 1 SMS on your 9 cents, WhatsApp gives you hundreds’ sense

TweetACab has avoided Facebook though. “it does not suit the real-time pace of the taxicab industry” says Nyagwande.

So, #WhatDoYouThink? Next time you need a taxi, are you going to have @TweetACabHre give you a ride?