Yesterday, Spiritage finally came out with huge adverts in the press claiming they have a modern 4G network. The “game’s just changed” shouts the advert! 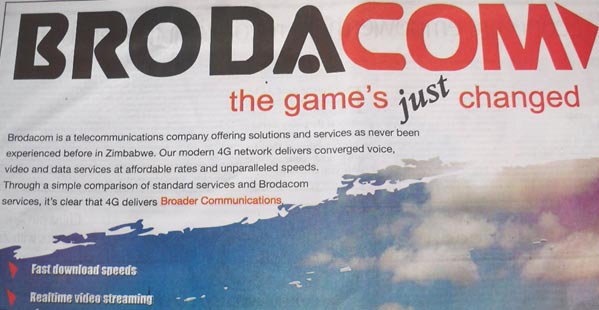 Back in April, we believed this was a strong possibility. Now, we’re just hopeful. The half-hearted and ill-executed ‘launch’ four months ago did in our faith. There’s also been too much talk around town about things not well at the company, senior executives leaving, and other such disappointing stuff.

We’re not convinced the game is changing, we’re just hopeful. Nothing we can see suggests this ‘launch’ is not like the July one.

The adverts contain a full page listing of Brodacom’s 4G services compared to “standard services”; an attempt to show just how broader Brodacom is. It also has some huge chunks of text explaining what the Brodacom company is, stuff about watching live online videos becoming seamless and some information about the whole Spiritage group. If you’re thinking ‘information overload and confusing’, you’re not alone.

The bold claim here though is 4G. Just a little over two months ago, Spiritage Communications managing director Kangai Maukazuva told us the company had deployed a 3.9G network. This time, in clear favour of message simplicity and of-course standing out from the 3G GSM crowd that is Econet, NetOne and Telecel, that number has been rounded off to 4G. Well, either that or some major upgrade work has happened in these two months. Who knows?

We have not used the Brodacom internet and will not say that the company is not offering 4G services. We have asked them for a test unit to review and offer our opinion and we’re looking forward to them saying yes, so we can experience what good internet feels like!

Our position remains that while 3G, 3.5G, 3.9G and 4G and so forth are standards, their meaning has been watered down by marketing departments that just abuse them. And it’s not Spiritage. Remember Econet’s 3G in 2009? It’s same claptrap world over. Our advice is this: don’t decide to buy just because you’ve seen a “We have 4G” advert. Ask to test the service and see if it meets your needs first before you buy.