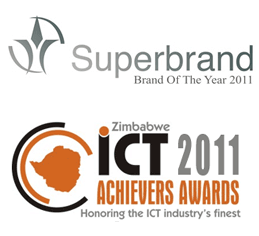 In the space of 3 days, the largest telecommunications firm in Zimbabwe, Econet Wireless, has been awarded by both the Marketing Association of Zimbabwe in the Superbrand 2011 Awards, and the Ministry of ICT in the ICT Achievers Awards 2011.

Econet scooped the first prize in the top superbrands of the year for the second consecutive time and was conferred with the award at a ceremony at a local hotel on Thursday, 8 December 2011 beating other brands like Coca-cola and Spar. The Marketing Association of Zimbabwe (MAZ) award recognised Econet for success in Africa where it has become a brand spanning a number of countries.

Speaking that the presentation of the awards, MICT officials said Econet was being recognised Econet for its innovation with the EcoCash mobile money service which the company launched in September this year. The mobile company is also credited with significantly contributing to the expansion of mobile telephony services to ordinary Zimbabweans that has seen Zimbabwe’s mobile penetration rate rise from 24% to 64% in just 2 years.

For the full list of the ICT Achievers Awards winners, please read this article.