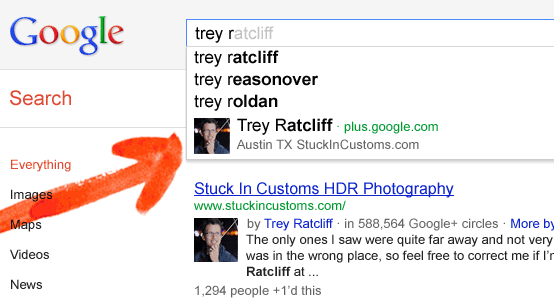 Google’s latest move to integrate Google+ with the Google search engine results page (SERP) got me worried.  Google says from now on, the results you see in Google Search will include personalized Google+ data related to the search. It basically ties Google+ as a social network to Google search to produce a product that “understands not only content, but also people and relationships.” The new features are called “Search plus Your World”. These features can be turned off but, honestly, how many people make the effort?

It’s all great and sounds like it will help you connect to people and social network brand pages better. Except it doesn’t: the results will exclude two social networks more relevant to most people today than Google+. Facebook and Twitter.

See this Google+ post by Matt Cutts for example. Matt Cutts is the Head of Google’s web spam team.

Twitter has already complained about this and Google have basically responded that they are a “bit surprised by Twitter’s” reaction. But this post is not about their war of words. It’s about us the users of Google Search.

The move is disingenuous at best. Google is using its Search monopoly to compromise search itself. All just so they can promote Google+. I haven’t seen Search plus Your World in action but their blog posts and employee updates on Google+ about the issue say it.

Google is pretending Google+ is a very large social network and that Facebook and Twitter don’t exist, or that they simply don’t matter in delivering relevant socially personalized results. Google is pretending Google+ currently gives users around the world the full social deal. It doesn’t. They’re also pretending they don’t owe their users a detailed explanation of the absence of Facebook and Twitter in the socially personalized results. Most worrying of all is that they are pretending they can just search parts of the internet and give us the false sense that they’re searching the whole internet.

How about Google demonstrates how this is in our best interest and how it gives us a complete personalized “world”. How about they make it clear why the data that is available publicly from Facebook and Twitter is not enough for the new features.

I don’t know about you, but when a product as important as Google search tells me it’s searching my online social world, I’d like to believe they’re covering all of it, not just some 10% of it. As a user I’ll always know I’m not getting the best socialized results available out there.