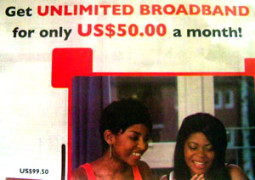 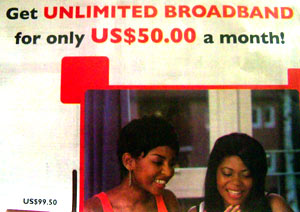 A year ago, US $50 per month unlimited broadband was only offered by one internet provider, the state owned PowerTel. Many would argue doesn’t really ‘need’ to make money. It wasn’t  the best internet in town, largely because of congestion issues, but PowerTel afforded many small businesses and middle income earners an opportunity to have their own internet connection for the first time. The rest of the providers had prices north of $100 for any type broadband, forget unlimited.

Today, unlimited packages priced around US $50 are not as uncommon. ZOL introduced mid last year a $70 package connecting at 512kbps for the first gigabyte of usage and best effort thereafter. In July 2011, just a month after the ZOL price reduction, TelOne literally broke all rules with a $30 10GB package which, everyone that uses knows is not really limited to 10GBs. TelOne had re-established their monopoly on ADSL in preparation for this launch so they unsettled the ISPs quite a bit there.

All this while, another internet provider, Africom, was disrupting the market with an offering no other private company could match. The company has for more than a year now been giving away internet at $18 for the first gigabyte bundle and lets customers buy as many first 1GB bundles as they want. The competition says it’s unsustainable and that if continued, could threaten Africom’s viability. But the company seems to be soldiering on and one thing is certain, Africom’s been a major contributor to not only getting more people online through directly signing up customers but also through forcing the other ISPs to review their margins in a bid to remain competitive.

In November, a relatively new Internet Access Provider, Brodacom (a Spiritage Business company that was called Valley Technologies before they launched the consumer services commercially) introduced its own $50 unlimited data package that connects at 256kbps. As the year came to a close in December, YoAfrica, one of Zimbabwe’s largest ISPs, followed with the launch of a $50 256kbps unlimited data internet option.

The price per megabyte of mobile broadband services from the country’s GSM operators (Econet, TelOne and Telecel) also reduced over the year, albeit not at the same rate. But this too increased pressure on the ISPs to review downwards. Mobile phone internet applications are not as bandwidth hungry as their desktop counterparts and, even at a higher price per megabyte, the internet works out cheaper to the user on mobile. The ‘desktop internet’ providers had to respond to this.

Another cause has been the increased international bandwidth coming into Zimbabwe. A total of 4 providers established direct access to fibre connections at Zimbabwe’s borders last year and collectively they account for over 3 Gbps lit fibre bandwidth capacity. This has given local internet providers more options for wholesale internet and the competition has helped push the price down.

In just a year, a huge chunk of the price of connectivity has disappeared. The trend is clear. Small business and a growing middle class increasingly see internet as a need and are going out to shop for it. The competition is stiff. Smaller operators are getting squeezed and as a result some consolidation has also started to take place. At the beginning of 2011 ZOL and YoAfrica (the two biggest ISPs then) created a strategic alliance one of whose objectives was to enjoy bulk discounts from wholesalers. At the beginning of this year ZOL sold to global fibre and satellite player, Liquid Telecom.

Prices are likely to continue dropping in 2012 as internet penetration grows. It’s not farfetched at all to see an even steeper drop in 2012 than Zimbabwe registered in 2011. if not an outright drop, the definitely some creative new packages for low income earners previously excluded groups of people