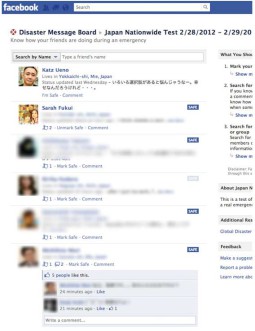 Natural disasters always have casualties when they strike, and the drama goes on after the strike when family and friends have no one to answer them when they call to check who made it out and who didn’t. Although a simple phone call can be made, it’s usually not enough to check on all your acquaintances to check on you as well as for you to check on them.

Facebook has introduced the Disaster Message Board, a new service they have been testing out which is for now only available in Japan. With the service, you’ll be able to click an “I’m Safe” button, and your friends will know that you’re well. A friend can also mark another as ‘Safe’. Of course the friends have to be on Facebook, yourself included, but it is still a great effort nonetheless. Google is reportedly set to come on board with an offering of its own, as well as Japan mobile carriers.

It’s similar to the usual News Feed on Facebook where you see your friend’s recent updates except with Like replaced by Safe. Here is a screenshot , courtesy of Katz Ueno 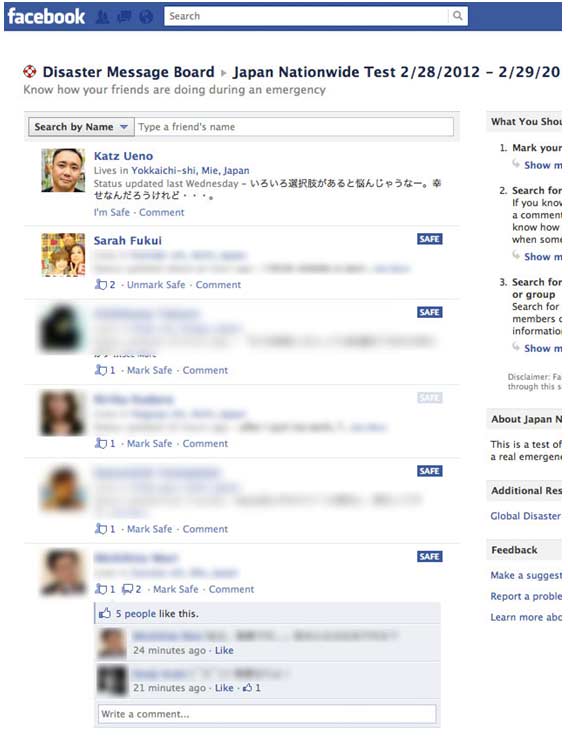 Social media has become a key tool in disaster response and relief, even during the times of the Haiti incident where people were posting on Facebook about being trapped under rubble. By-passers also took and uploaded pictures which also helped rescue teams know the situations they were going to deal with before actually getting there. It’s without doubt that social media was a key tool in fundraising for Haiti, and even though we can’t use it to prevent disasters we are better-alerted and helping hands better-informed.

Statistics from Internet World Stats for Africa estimate that of our estimated 1 037 524 058 population, 13% are on the internet and 3.6% are on Facebook (December 2011 figures). Peter Lyons, GSMA director for Africa and the Middle East, told BBC News in an interview that Africa’s mobile penetration stood at 65% as of 2011 Q4. This is a more subtle figure compared to those on Facebook.

The significance of social networks’ disaster boards in Africa is questionable, because considering only 3.6% of us are on Facebook (the largest social network), it may not be such an option.  A solution fit-for-the-continent would probably do better because mobile penetration is satisfactory.

Local developers could create simple SMS or USSD based applications where you register your phone number and the phone numbers of those you would like informed if you survive a strike. Then it would be as simple as sending an sms to a specific number or shortcode, and have a message sent to all your close acquaintances that you are safe. Then there could be say an enquiry number where you can SMS the number of the person you want to check on.

What other ways do you think are effective for our local scenario as Africans?