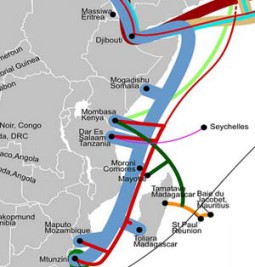 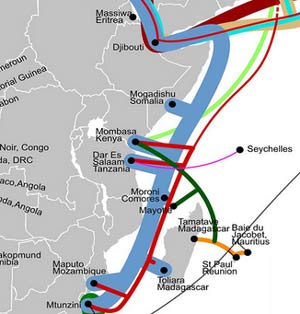 It’s now week 3 since it was first reported that an undersea fibre cable on the shores of East Africa was down. Then, it was reported that the Eastern Africa Submarine Cable System (EASSy) had broken on 17 February 2012 and that a repair vessel had been sent to fix the problem. Eventually it became clear the situation was worse.

About a week later, it emerged a ship dropping anchor off the coast of Kenya had severed The East African Marine System (TEAMs). (see correction below)

Chris Wood, the WIOCC chief executive has called the situation a very unusual one. WIOCC is the majority shareholder in EASSy, currently the single largest undersea cable on the shores of Africa. WIOCC and TEAMs have both indicated repairs will take up to three weeks.

In Zimbabwe, internet users and ISPs served by the country’s fixed line operator, TelOne, have been experiencing intermittent internet services since the EASSy cable broke. TelOne is part of the WIOCC consortium that has ownership in EASSy. Other internet providers using alterative international cables like SEACOM have however not been affected.

Our sources tell us Liquid Telecom and PowerTel, the other two international bandwidth resellers in Zimbabwe, have not been affected by the EASSy outage or the increased load on SEACOM due to traffic from the failed cables that’s been rerouted to it.

We have sent communication to TelOne to get the extent of disruption that the EASSy outage has caused but we’re yet to get the information.

EASSy did, however, suffer a cut on February 17th between Djibouti and Port Sudan. The cut to the EASSy cable only affects the section of cable between Port Sudan and Djibouti. The rest of the cable is working perfectly and due to the collapsed loop network configuration (“collapsed ring” protection mechanism) and the impact on customers has been minimal. A second reason why the cut to EASSy did not have much impact on customers is because the vast majority of EASSy traffic exits Africa through Djibouti, and the cut happened to the north of Djibouti. EIG cable was also cut just north of Djibouti.

The map image has been extracted from a map on manypossibilities.net