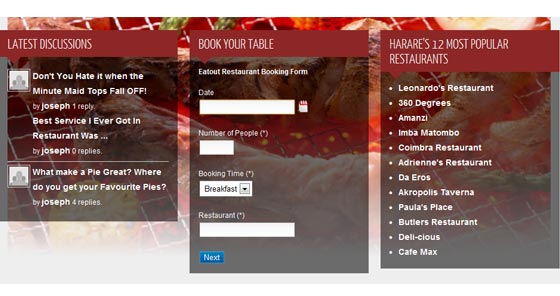 If you have visited eatout.co.zw in the last two weeks, you probably noticed that the website is spotting a fresh new look. The restaurant guide and review website has been redesigned, again. We can’t remember the exact number but the website must have gone through about 4 design changes in the last few years.

Some quick disclosure first: The guys at Eatout are our friends and we saw the new design before it became public and like friends do, we provided a few (very few) before-launch comments for the team there.

Anyway, the one great improvement with the latest design for us is accessibility. It’s easier to get around and find the place you’re looking for. The new Eatout has also been designed to enable visitors to make a booking immediately after loading the site. It’s probably been done to save returning visitors (that are on the site to just make a booking) some time.

The social elements of the site have also been emphasized. A “Latest Discussion” section is very visible at the top of most pages and there are “Facebook connect” buttons generously thrown around the site. Comments on restaurants and blog posts (under a section called Taste Spotters) are also powered by the Facebook comments system.

And there’s more social stuff. A whole social network for the site actually. One called Foodbook. Foodbook, Facebook, get it? The Foodbook resembles Sha (A Zimbabwean social network) in so many ways that the web techies amoung you will know it’s because both sites use JomSocial, a Joomla-based platform for building social networks. We don’t like the Foodbook idea. Not the name itself, but having a social network on Eatout. It looks and feels overloaded. There are far too many social networks out there already demanding people’s online time and as we note above, Eatout’s core pages already have social stuff heavily integrated.

In terms of overall design looks, the good is that it feels warmer and foodly. More foodly than previous iterations of the site. The bad is that the design lacks flow. Elements feel just thrown together in some sections. There’s also some badly formatted text around that site; text that looks too big or too bold etc…

Design has been an issue with Eatout for some time now and we feel they are yet to get it right. You almost wish they would outsource the design to a professional web design house or hire more talent so that the Eatout staff that make the content so useful focus more on that. Eatout remains one of the most the useful websites in Zimbabwe.