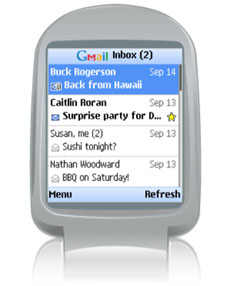 Whatever you say can and will be used against you. A recent quote from a post on the Google Africa blog reads “[Google:] Making the world’s information universally accessible and useful means making it available to people no matter what device they use”. I suppose in a world where quad-core mobile processors are the headlines it is all too easy to dismiss the group of people who access the web on their phone using Opera Mini and have never caught up with the whole this-app-for-that-purpose craze.

Years have passed and GMail on mobile browsers hasn’t changed in design, but time has changed it for the worst. It is inconvenience at its peak. The links in email cannot be clicked; no option to “Show Images” in the email and when you are composing mail there is no means for you to upload an attachment. At the time of writing i was still trying to look for anything that resembles a settings option. Yahoo is different though. The mobile version of their mail service has an award worthy design (awrds they have won actually) and allows uploading of attachments, opening of links and sorting mail in a fashion that is easy to get addicted to.

It’s not just Google, Facebook is not to be spared too. They rolled out the new timeline look only on the “smartphone” browsers and are constantly adding features such as the recent one-click commenting and liking system. Facebook also launched interest lists which allow you to categorize the people and pages so that you bring sanity to the information overload. When they say Facebook mobile, they are either referring to the Android/iPhone applications or the smartphone browsers such as Opera Mobile, not the few hundred kilobyte Opera Mini.

The story is a bit different with a lot of websites developed in Africa. They are on mobile just as they are on the desktop and that is where the problem is. The only mobile factor added to them is that which mobile browsers impose on a website to fit it to the small screen. Blogs are a very common example. When the website is on mobile and the browser has finished loading the huge page and tried fitting it on the screen you first have to scroll past the menus and all their submenus, past all the sidebars (Like Us On Facebook, Google Ads, invitations to subscribe, random articles) before you can read the content. The scrolling causes much discontent and visitors usually do not come back around again. Considering mobile is how most Africans access the internet, one would expect better compatibility from all African websites.

Maybe for Google et al there isn’t a significant revenue contribution to their pockets from markets where people use mobile phones that allow one app to run at a time. What they should note is that if they are ever going to grow significantly it will only be in markets such as Africa, now labelled as “The next growth frontier”