South Africa’s Rob Sussman and Lance Fanaroff introduced (officially) in December of 2011 a cost-free money transfer system that allows anyone on Facebook to transfer money to anyone else on Facebook. The two founders have taken the concept to Facebook’s Palo Alto offices and to prominent banks and financial institutions where they have received the nod of approval.

The aha moment of the concept occurred 10 years ago when social networks were not all the rage they are now and the founders waited until the time was ripe.

According to their website, ZunguZ is essentially a multi-tiered platform that has deep integration into the Facebook social graph and a host of financial services. The first tier is live and its adoption by consumers is beyond has been beyond their expectations. They added that while there are a host of diverse P2P, P2B, B2B payment systems in the market ZunguZ does not compete with the likes of PayPal. ZunguZ is the first platform that allows a Facebook user to pay another Facebook user (with no requirement for a user to have a bank account or email address). 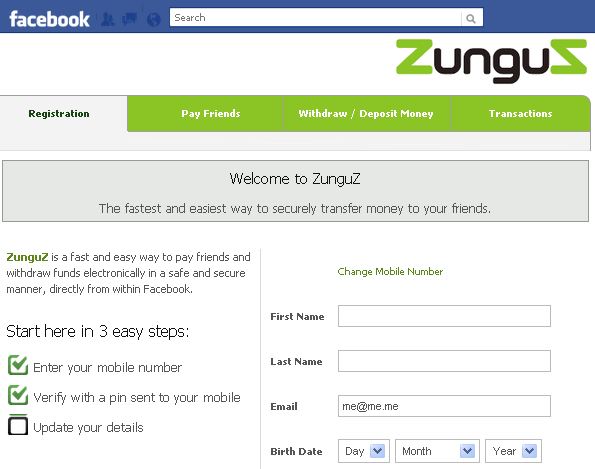 In an interview with The Destiny Magazine, the founders said they do not intend on big marketing budgets but rather by the referrals Facebook users will make to their friends; a concept they call “Click, purchase and share”. When you do not have an account and money is transferred to you, you simply have to pay a visit to one of the Banks on their network. The second-tier in their roadmap is the “Z-Button” which will enable one-click payments. After a purchase users are urged to share their purchase and if one of their friends makes a purchase because of them, they get a small cut or reward.

They are launching in the USA, Mexico and India and reportedly have requests from banks and telecommunications giants to join the platform.

ZunguZ has launched at a time when retailers were reportedly shutting down their Facebook shops citing poor adoption by customers and were starting to focus on using Facebook to drive traffic to their websites instead of urging people to do the shopping within Facebook. Last year, only 10 percent of Facebook users made purchases on Facebook. ZunguZ seeks to change that altogether and bring the concept of social shopping to all of Facebook’s almost billion people.

The startup’s third tier on their roadmap will be releasing an API for developers to create plug-ins for the platform. ZunguZ Inc. is a Delaware USA registered company with a presence in the heart of Palo Alto, Silicon Valley (not far from Facebook) and based in Cape Town, South Africa.