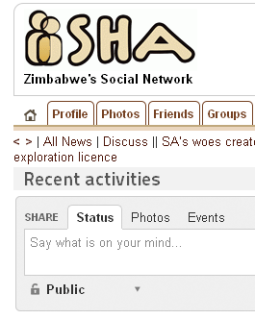 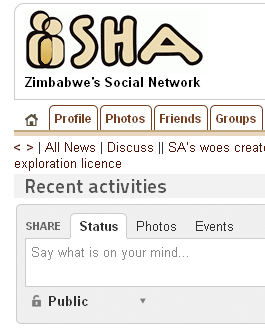 Some five months ago, in November, Webdev, the company behind Zimbabwe’s successful online classifieds site, launched a social network and named it SHA. They were not the first to try social networking locally; there have been many ‘local’ social networks already. All of them open source projects like JomSocial, Sharetronix, BuddyPress, elgg themed for the local audience.

SHA’s not much different in that respect, but unlike other such projects, SHA’s is owned by an internet company that already has heavy visibility and multiple platforms to showcase its products in Zimbabwe’s internet space. If there’s a company that has a great chance making a web project visible to users, it is Webdev.

It’s been 5 months now. We contacted Webdev Founder and Managing Director, Garth Drummond, to take stock of the time since launch and have a peek into what the startup has planned going forward.

The growth of the social network in users is visibly very slow but it’s growing nonetheless, and for the signed up users there’s always some activity on the default newsfeed and new features added to show the site is alive and expanding. SHA doesn’t hide how many users is has managed to sign up so far. It shows clearly on site that they have 1,575 users as of the time of posting this article. Really not much for a social network; some of you readers probably have more Facebook friends than that.

But disappointing initial adoption numbers don’t always spell ultimate failure with such projects. A great recent example is the recent revelation by CEO of popular social media site Pinterest that they had “catastrophically small numbers” in their first year after launch. So small he’d have quit if he had listened to conventional wisdom to fail fast and move on. And Webdev knows this. They have experience being patient with success. Commenting to the article we wrote last year, the founder reminded us that they intend to work hard and exercise some patience before they succeed:

A lot of hard work has already gone into SHA, and a LOT more will go into it. … having taken over 10 years to really get classifieds going we are no strangers to working hard to get something going.

We asked Garth Drummond a couple of questions about the progress so far, what people are using the site for, the visitor stats, the challenges they’ve faced and a lot more. We’ve decided to post the email QnA we had with him here:

What’s the growth been like in the months since it launched?
Very fast in first few weeks, now it’s constant, averaging 5 members a day.

What is the Google analytics traffic like per day (page views, visits)
1,200 page views per day. 350 visits per day

Any new features that have been implemented since launch? Why?
Live chat, games, more news, weather, bulk photo upload, subscribe to events on email, polls, vote questions up/down (not just answers), polls in questions and lots of other little improvements. We had always intended to add these, just in phases as time permits.

What have been the popular features on the social network?
Listing from the most to least popular
– questions and answers
– news
– Groups
– blogs
– events
– friends
– photos
– downloads

Questions and answers works well with most Zimbabwe related questions being answered on the same day. News is popular because it is pulling all the printed newspapers articles into one place. Some groups are popular because they are Zimbabwe focused and allow for events, photos and discussions within them, as well as email notifications to all the members of anything new.

Friends is developing in a unique way because most people have their friends on Facebook. On SHA people appear to be finding each other through SHAred interests here in Zimbabwe, even if they don’t know each other.

Where you are now, how does that compare to your expectations when you launched?
We did hope to have more subscribers and activity by now. The site was always an unknown experiment with the firm belief that Zimbabwe needs its own social network. We have not yet launched some of our unique content ideas where we feel the significant growth will happen.

What are some of the major challenges you’ve faced on the platform?
Upgrading to latest versions of the software and ironing out bugs is always time consuming and costly. We have also had a couple of Senegal scam artists that we catch on the same day they joined and banned their set of IP addresses.

There have been security concerns from the tech community, with some people saying profiles are too open by default and others saying they are not convinced their private data is private on the platform. What is your comment on that?
Obviously there are options to put limited or no information up, or show some or all of your profile only to friends, or just themselves. The profiles are open by default on purpose to help Zimbabweans interested in similar groups and activities reach each other quickly and easily, as well as find people that lived in your home town, current town, old schools and work places.

How does SHA protect users against inappropriate content, e.g. adult material, extreme violence material?
We would remove it as soon as we are aware of it. We do have a couple of adult jokes on the site but that’s as far as we will go.

Have you had to pull down any user-posted content from the site? Have you had to ban any users?
We have deleted the odd business advertising post, and asked them to post on the classifieds link and keep SHA social.  We have banned the odd Senegal based user for attempting to contact all users pretending to be looking for love. These are scammers.

What’s the outlook for 2012?
I don’t want to let all the cats out of the bag, but the month ahead we see additions such as notification improvements so users can opt in/out of each single notification setting up recurring events group file upload so group members can SHAre files inside group discussions options for featured events and photos to highlight certain items more than others group updates in one page so you can see any updates from any group you are a member of in one page.