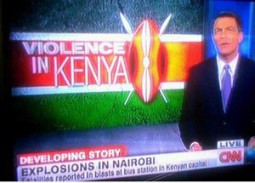 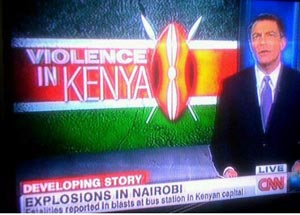 A backlash on Twitter by Kenyans accusing US news channel, CNN, of sensational reporting has forced the channel to apologise to Kenyans and pull down a video report on suspected terrorist bombing that took place in downtown Nairobi.  The CNN report portrayed the grenade blasts in Nairobi as “violence in Kenya”, wording that triggered outrage from the tweeting Kenyans.

Using the Twitter hashtag #SomeoneTellCNN the Kenyans on Twitter (#KOT for short) came together to criticize the global news network for misrepresenting the facts. Hashtags are a way of tagging and categorising content on Twitter. The #SomeoneTellCNN hashtag was posted on Twitter so many times on Sunday, March 11, that it became a trending topic on the platform globally.

Here are some of the #SomeoneTellCNN tweets:

It is extremely irresponsible for CNN to paint Kenya as a nation in chaos while we are victims of terror. #SomeoneTellCNN

#SomeoneTellCNN that it wouldn’t kill them if they reported more positive stories about Kenya & Africa in general.

“@Zawadin: #SomeoneTellCNN that Africans watch CNN too & that we will not be silent as they misrepresent us. We Will Be Heard!”

#SomeoneTellCNN to get their facts correct when they report. Nkt. Kenya is a peaceful country.

#someonetellCNN Thats professional negligence and you should offer official apology! @CNN Am angered but your irrational reporting!

And the apologies by the CNN correspondent in Nairobi:

Our reporting onlast night was accurate, the banner used in bulletin was not. I contacted CNN for future bulletins. Apologies to all.

We are having offending video pulled. Again, apologies for the mistake. It was changed on air, but not online. Now it is.

Some tweets after the CNN correspondent’s apology:

Your broadcast on violence in Kenya was not on twitter,it was on air. The apology should go to the same people,on air #someonetellCNN

@McKenzieCNN #someonetellCNN that an apology doesn’t erase the problem presented: the sensationalization of news about Africa.

Whether the story is about #Kenya or #Uganda; positive or not tell it as it is. No exaggeration. No more lies about Africa #SomeoneTellCNN