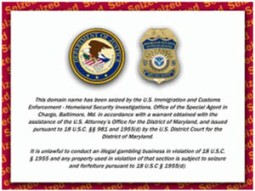 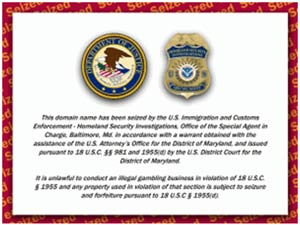 If you have a .com, .net or .org domain you are subject to US domestic laws and jurisdiction. This allows the US government to seize your website or even seek your extradition to USA to stand trial, based on allegations of breaking their laws. You’re also at risk from any mistakes and collateral damage according to an article on New Zealand website The National Business Review. There have been many stories of seizure by the US where foreign websites which violate US legislations were taken down.

The greater fear is that of the “premature” shutting down before full investigations. They usually shut you first before you clarify yourself. 84 000 domains went offline last year in February after the popular service FreeDNS was taken offline for three days when a court ruling stated there were links to child pornography on some of the domains. Over 70 websites were taken down again last year when they were accused to be trading counterfeit goods, it may have been true for some of them but not all were trading in the US. The list is here.

Bodog.com is an online entertainment brand that was launched in 1994 by Canadian entrepreneur Calvin Ayre which grew to be a popular online gaming and betting platform. After the US passed the Unlawful Internet Gambling Enforcement Act of 2006  (UIEGA) and lauched a war-on-gambling sites, Bodog was one of the many that were taken down despite gambling being legal in Canada. Bodog’s domain was registered through a Canadian registrar. To date, they haven’t won the legal battle. Another example is JotForm: an online service that helps websites to easily create online forms that they can integrate on their websites and use for data collection. It was taken down after the US Secret Service issued an order to GoDaddy. 2 million forms across the internet went down immediately and later when the matter was resolved the US Secret Service admitted it a mistake.

Verisign is one of the  US based registrars and they administer all of .com, .net, .jobs, .cc and .tv domains. What these administering bodies had to say about all the takedowns was ”They [US federal agencies] have the right to seize any .com, .net and .org domain as the companies with the contracts to administer them are located on American soil, and therefore fall under U.S. laws.” This means if your website crosses paths with US laws, or is suspected to, it will be shut down and armoured fed will swing from choppers into your offices. Ok maybe that’s an exaggeration, but the damage done to your domain and brand may be irreversible since you can’t even put a banner notifying of your relocation (if you ever). It’s also likely that those who use your website will label you criminals and only the knowledgeable among them will know the story behind.

So how does International Corporation for Assigned Names and Numbers, the global body that oversees the domain-naming system, feel about the U.S. government’s actions? ICANN declined comment and forwarded a 2010 blog post from it’s chief Rod Beckstrom, who said ICANN has “no involvement in the takedown of any website.” ICANN, a non-profit established by the U.S., has never awarded a contract to manage the .com space to a company outside the United States — in fact VeriSign has always held it — despite having a contentious relationship with ICANN that’s involved a protracted lawsuit. But, due to contract terms, VeriSign is unlikely to ever lose control over the immensely economically valuable .com handle.

The .com domains have proved viable economically in that to the general internet user it implies the website serves a global audience when compared to a .co.zw for example, but with the risks involved is it worthwhile? Finally, a note of caution to the complacent, to the people in the “I’m not doing anything wrong so why should I care” camp. When a government finds a means that works, the range of ends to which it feels justified to apply that means can expand very quickly- Vikram Kumar

Image credits: Bodog.com, and any other website taken down by the US authorities.

13 thoughts on “The legal risks of having a .com domain”