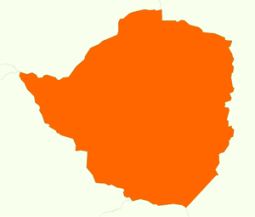 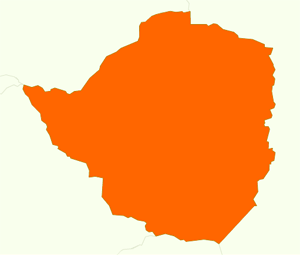 Current download speeds rankings for Africa by Ookla, show that Zimbabwe is now in the top 5 Africa countries with the fastest broadband download speeds on the continent. Ookla runs the popular internet speed testing website, Speedtest.net, and uses the millions of tests carried out on the platform to show the current global rankings for consumer broadband speeds.

According to the report, Zimbabwe’s average speed is now 3.05 Megabits per second (Mbps). The speed represents the moving average throughput over the past 30 days and shows only where the average distance between the client (from where the speed test is run) and the server is less than about 480 kilometers.

Being a rolling average means the broadband speed shown is used by Ookla to smooth out short-term fluctuations and highlight longer-term download speed trends. It is not unusual therefore for any country’s rating to move slightly up and down each day.

Countries ahead of Zimbabwe in the top 5 as of today are Ghana, Kenya, Angola and Rwanda, which have download speeds of 5.16 Mbps, 4.98Mbps, 4.53 Mbps and 3.29 Mbps respectively. Some countries that usually make it to the top 5, like South Africa and Libya, didn’t make when we capture the statistics this morning. The two scored download speeds of 2.98 Mbps and 2.85 Mbps respectively.

Here’s a table of Africa’s top 10 fastest download speeds prepared from the stats we captured. 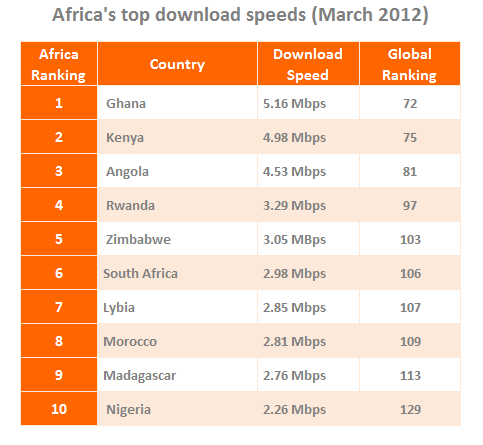 Seychelles and Senegal two countries with significantly high internet penetration, (reportedly 38% and 15.7% respectively in December 2011) are curiously missing from the Ookla rankings.

Zimbabwe has had major improvements in international bandwidth connectivity over the past 2 years with 4 operators now running a live fibre connections to undersea cable providers. Local terrestrial fibre networks are also increasingly being laid with all cities now connected to a fibre cable running to a major operator. In addition, the installation of last mile fibre to the business and to the home, as well as wireless connections via 3G, WiMax and CDMA has also accelerated since the end of the country’s hyperinflation period in 2009.

The table is an adapted version of one created and posted by Techloy, a Nigerian tech blog.