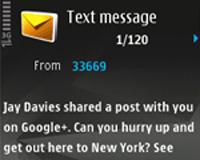 Google announced yesterday that users in 23 African countries can now post to Google+ via SMS. The move is the latest in Google’s efforts to encourage use of their relatively new social network. “We wanted to ensure that Google+ is also available at times when you are not connected to the internet” says the announcement.

For users in East Africa, Google has made it possible for them to use SMS commands the local Swahili language.

It’s not clear just how effective this will be in enabling users to sign up and be active on the social network but there’s definitely an opportunity for Google on the continent. Providing a tool to mobile subscriber to update and chat with friends on a social network has worked quite well in Zimbabwe for Econet Wireless and ForgetMeNot Africa. Econet told us in December last year they had 600,000 registered users of their eTXT service which allows subscribers to post and chat on Facebook via SMS.

Unlike Facebook though, Google has not yet opened Google+ to third party developers for applications that write to Google+ (updating the status for example), effectively shutting out tech startups on the continent from the platform.