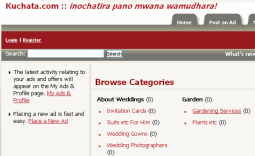 Classifieds (and business directories), like Social Networking, are a favourite with local tech startups. Very much so you’d think with all this work addressing the classifieds problem, it’d be solved by now. That an ordinary person would be able to easily post an ad to a platform with any device they have and within minutes be getting calls, and hopefully by the end of the day have a couple of serious leads. You know, the way it works when you throw a classified ad in the paper. You’d think with the 72% mobile penetration, the opportunity is clear enough the numerous startups would have cracked it by now.

They have not. Newspaper classifieds are still the most effective way to do classifieds in Zimbabwe.

Yes, there’s Classifieds.co.zw and Dipleague but both platforms are still largely not found outside conventional web browsing and email. Despite its web successes for example, Classifieds.co.zw doesn’t even have a mobile version of the website. The fact that they knew this and more than a year ago, said they were working on one, only says they are technically finding it difficult to do so. Forget the fact that they could tap into an even larger SMS and USSD market. If anyone can convince a mobile operator to give them a chance, it’d be them.

Dipleague on the other had only works effectively via email. It’s basically a mail list where users blast each other with adverts. To reduce the noise (from the mail list blasting) the moderators of the mail list have banned all free webmail email address like Gmail and Yahoo, thereby limiting even further the people that can use the service.

Looking at the tens of classifieds sites, you can’t help notice how fully functional the websites are. But that’s only because most are open source projects downloaded and theme-customized into a local feel. So it’s mostly only as “fully functional” as the open source project has gone. Beyond installing the site and announcing it on Facebook and Twitter, not much planning has gone into what the business of classifieds is. Sometimes the content strategy almost looks to be we’ll announce and people will start posting ads and creating their business profiles.

As a result, the friends and family, the first people to visit the website, will check it out, congratulate you on launching ‘Zimbabwe’s leading classifieds platform’, then they go on to click around for some content which they don’t find, and because of it, never return when they leave. Some will do you a favour and post a few ads, but they never get an enquiry on the stuff they posted, so again, they really have no reason to return.

Just to illustrate that further, the founder of Classifieds.co.zw, Garth Drummond, said it took “over 10 years to really get classifieds going”. And even then, they had to employ some clever tricks to keep the site looking busy and full of content. Dipleague was a different case; the site was launched to solve a simple specific problem – the acclimatization of the diplomatic and NGO community – and “Soon the list took on a life of its own” says moderator Shasha explaining how the site service usage exploded as the effect of hyperinflation rocked Zimbabwe.

Starting a web or mobile startup is more than just installing open source software and announcing it on Twitter. The real work is on building the business, not installing software. It’s in understanding the market, the competition, and ultimately the problem being resolved.

To be fair, the SMS platform is in the hands of the mobile operators. But surely, short of circumventing them altogether, ways can be found to allow SMS subscribers to send in their ads. In fact the ‘mobile operators are closed’ argument doesn’t hold much water anymore.  Startups like ForgetMeNot Africa are actually looking for other startups that’d like to reach SMS subscribers from the internet via their recently launch API.

Note: Zimbabwe’s failed business directory startups include one I  (and two other people) attempted back in 2008/2009. On realising it was either we scrapped content off existing sites, or we did own data collection, entry & marketing of the service, we quit before even installing the software.