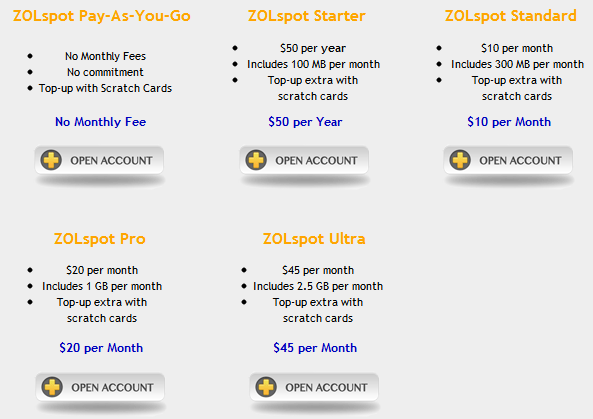 Zimbabwe Online (ZOL), the ISP that has the largest number of Wi-Fi hotspots in Zimbabwe, has slashed the prices of its Wi-Fi internet service. The service has effectively become one of the lowest priced internet packages in the country. But the slash is coming with some not so good news; ZOL is killing the 15 minutes free trial it offered customers on its ZOLspots (ZOL hotspots).

The price slash basically introduces a number of ZOLspot account packages giving users data bundles based on a monthly or annual fee they pay.

Here’s a screenshot of the new packages:

As shown in the image above, users needing more than their allocated data for the month data will use scratch cards to top up. The price per megabyte on the scratch cards will vary depending on the amount of data bought; basically the price reduces as the bundle gets bigger. The lowest data bundle, 100MB is priced at US $5 (5 cents per MB) and the largest, 4G, costs $100 (2.5 cents per MB). In comparison, the lowest price per MB on the old pricing was 7.3 cents.

The price drop is quite significant and competitive. The monthly price for 1GB for example is slightly lower than Africom’s mobile broadband 1GB bundle, which has become a favourite locally with home users and SMEs. But it’s still unfair to compare the two as one is meant to be a mobile on the go connection (Africom) and the other, just secondary connectivity when, say, eating out.

Interestingly though, ZOLspots were more than just a secondary connection. For many people in general and youths bootstrapping one man web and mobile startups in particular, ZOLspots had become their primary connection and they took full advantage of the free 15 minutes. Some to the extent of hacking the hotspots to get free 15 minutes bits of internet the whole day. This no doubt contributed to ZOL’s decision to discontinue it.

ZOL has more than 85 Wi-Fi hotspots in Harare, Mutare and Bulawayo. In January this year the company joined the Econet family after it was acquired by an Econet subsidiary, Liquid Telecom. Econet is the largest mobile operator in Zimbabwe. Liquid Telecom has the largest optic fibre footprint in the country (and the region too) and ZOL the one of the largest consumer facing broadband internet providers in the country.