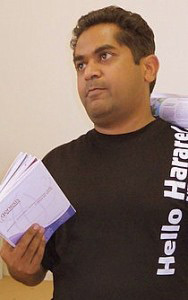 Zimbabwean web entrepreneur, Joseph Bunga, explains how after launching his first internet startup he found the market wasn’t ready for it. Today, his startup eatout.co.zw is not only profitable; it’s the most popular restaurant guide and reservation website in the country. The Eatout journey wasn’t at all rosy, he recalls, nor did their expectation of an easy and relatively quick path to profitability turn out any close to the experience they got into for the next 3 years later; it’s perseverance and passion for the food and beverage industry that has kept Bunga and his team going. And the fruits are starting show.

The first hurdle was finding developers to build the first version of the site. Bunga’s tertiary education was in hotel management and he didn’t have any experience at all creating websites so he set up a team of developers to help him out. But 6 months later, the website was not online yet and he was frustrated. “People can sell very well but when it comes to the deadline, not only do they not deliver, they disappear” he says of his experience dealing with the few developers available in the country.

Not wanting to waste any more time Bunga decided to just do it himself. He started learning PHP web development and open source content management systems, and within a relatively short period his first web creation came online. He used one of the web’s most popular content management systems, Joomla, and used the little PHP he had taught himself to write a few lines of code to get things working the way he wanted.

“What happened was we launched the site expecting to see a large number of online bookings,” Bunga explains, “but to our surprise the Zimbabwean market still wanted to talk to a person to make a restaurant reservation. So we introduced a telephone number and saw the number of reservations go up significantly immediately. So someone would call and tell us the restaurant they wanted to eat at and we would then call the restaurant and make the reservation on behalf of the customer and then phone the customer back and confirm the reservation.” Quite a process but it worked very well.

The team also realized a lot of the functionality they had built in to the site was far ahead of the capacity of the internet connections the Zimbabweans had at that time. “We already had Google Maps on our restaurant pages,” he says, “but the bandwidth just wasn’t enough locally, people had to wait for pages to load. It just slowed our site down. Whereas today everybody expects Google Maps to be integrated into such a site, it was a great feature then but the country just wasn’t ready for it.”

Today, restaurants that refused to be part of the project saying they “didn’t believe there was any scope for online business” are increasingly getting new customers via the website and are keen to contribute their information to it. Bunga says their service is so effective it’s not uncommon for a restaurant to list on the site one day and receive their first booking from the platform the next day. 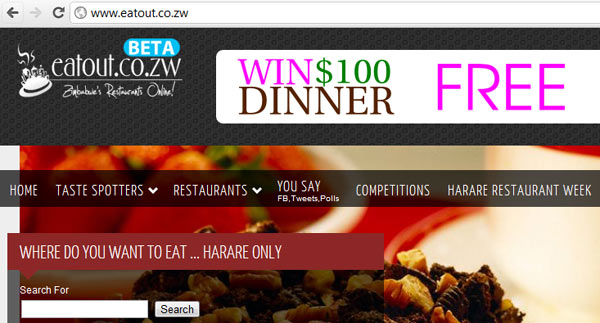 Eatout now charges the restaurants US $30 a month to list on the site, and 50 cents for every person they send to eat out at a restaurant.  The startup also takes ads on the site and so far their target clients have been the suppliers of the food and beverage industry and the restaurants themselves. Without revealing any figures Bunga says his business has been profitable for about 7 months now.

Thankfully for Bunga, the number of website visitors making reservations via the website’s forms is also growing as more people locally get accustomed to using the Internet to communicate and get things done. “A year ago we would do 95% telephone bookings and 5% online,” he says. That ratio has changed to about 70, 30.

The startup is also looking at other avenues for revenue, mainly the promotion of eating out to the growing middle class, who, Bunga says may not be exposed to the eating out lifestyle but have the money to do so. In fact, this month, Eatout will be running Zimbabwe’s first “Restaurant Week”. Bunga’s team is also working on a “Wine Route” and Coffee Tour which they are looking to roll out this year.

The team has doubled since launch, making Eatout one of largest employers locally in the web business, outside the internet providers. The startup has also engaged 10 independent food bloggers (called taste spotters), who blog about their eating out experiences on the site.

But it’s not just the low programming skills in the country Bunga has to deal with; his startup has challenges on other fronts as well slowing it down, “Look at the local hotel schools doing training for the food and beverage industry. Online marketing is not a subject that is being offered by any of them. In the industry, none of the marketing managers that are in place are using Twitter or Facebook to the level that they should use for business.” As a result Bunga has to look to students on attachment and interns and he trains internally to work in a mainly web based job.

24 thoughts on “An internet business working backwards: building a web start-up in Zimbabwe”