Is Firefox winning the browser war? 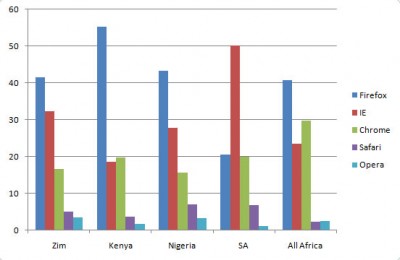 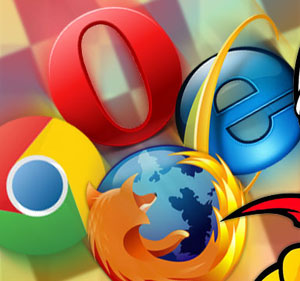 The other day I received a tweet that made me fall off my chair, it claimed Chrome had overtaken Internet Explorer as the world’s most used browser. After regaining my composure I followed a few links and despite the much vaunted displacement realised that Chrome’s (all versions) triumph was over Internet Explorer 9, however IE (all versions) still leads Chrome (you can check this by toggling the graph on the Satcounter  website). Other sources of usage statistics such as Clicky however show IE with a lead over Chrome. Given the imprecise manner in which web user statistics are compiled this difference is not surprising.

Chrome’s surge, though qualified as it is, is momentous. But what is the situation in Zimbabwe?

The picture in Zimbabwe however is somewhat different as Firefox iri kufaya (literally Firefox is on fire). The graph below shows browser usage for Zimbabwe, Kenya, Nigeria, South Africa and Africa.*

In Zimbabwe Firefox has a sizable lead over IE and Chrome. This pattern is consistent with usage in the peer group African countries Nigeria. The significant exception is South Africa where IE is the top browser, followed by Firefox and Chrome.

Satcounter shows that Chrome is winning the war against IE in the global marketplace as shown in the graph: 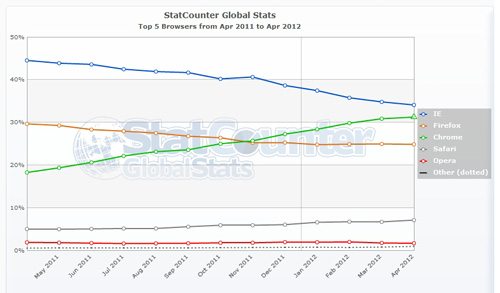 So why is Firefox king in Zimbabwe?

Firefox has not always been the leading browser but has always had a good share of the market locally but recently has overtaken IE.

Off the bat I’ll exclude Safari from this analysis because even though it is not exclusive to Apple it is by perception seen as exclusive to the Mac OS and iOS.

Historically IE has enjoyed the obvious advantage of being bundled with Windows therefore in some sense is the default browser on that platform. OS market share stats show that Windows 7 and XP are the two dominant platforms in all four countries (Nigera 80%, Kenya 87, SA 83%, Zim 86%) with Vista pushing Windows share in all instances to 90% and above. But clearly this advantage is not sufficient in Zimbabwe, Kenya and Nigeria.

A standard observation throughout the browser wars has been the dominance in usage terms of IE during the week when people are at work with a drop off over the weekend when people are at home and have greater choice as to what browser they use. This deduction being based on the habit of most corporate environments discouraging private software installations.

In my view to understand Firefox’s strong performance in Zimbabwe is to look back to when it was launched in 2004. Firefox was a global hit because it offered superior download speeds and had a much cleaner user interface and possibly these very features are what endeared it to local web users.

One must remember that dial up was the default form of access at the time so a faster loading browser was really cool. I’m sure the zeal of those early adopters inspired a growing and loyal fan base for Firefox.

Data from Insights for Africa suggests that Internet access speed is still a major factor in the African context. Unfortunately there is no data for Zimbabwe: 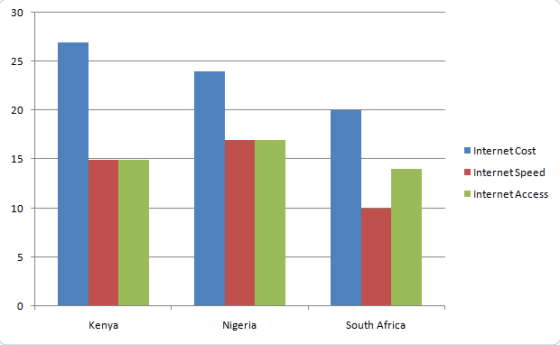 As a determinant of Internet use faster speed is seen as a driver of Internet use. South Africa shows the least concern for speed with 10% of respondents citing is as a factor for driving Internet usage. This seems to suggest that South Africa has generally better Internet access speeds than the other surveyed countries and therefore this factor is not so much of an issue for the user.

As these graphs show where you where Africans predominantly access their Internet is different. In Nigeria & Kenya  the Internet café and the home are by far the common places of access. On the other hand in South Africa the workplace is the single most dominant place. In turn the usage seem to conform to the work/home pattern of browser usage.

Browser performance now seems to be like the CPU clock speed wars were each manufacturer would claim to have the fastest processor. Intel was clever in differentiating its product through the ‘Intel Inside’ effort changing the users focus from raw clock speeds which were changing literally every day.

Some tests show that Firefox is not as fast as local users my think. From the onset Chrome was designed for speed and had a faster Javascript engine. HTML 5 compliance also seems to be another key performance feature especially the need for top video handling etc. In this regard there are claims that IE 9 has superior HTML5 compliance. However, running my own HTML5 compliance test using The HTML5 Test I returned the following results:

Scores are out of 500 and the closer to 500 the better the HTML5 compliance.

The site notes that the “HTML5 test score is an indication of how well your browser supports the upcoming HTML5 standard and related specifications. Even though the specification isn’t finalized yet, all major browser manufacturers are making sure their browser is ready for the future.”

So in this cacophony of browser performance factors I’m sure users today will not be switching browsers every time IE, Chrome or Opera produce a better performing version. It’s like all those medical studies that tell you what to eat and not eat to live healthier and longer, in the end there just so much information you just tune out and stick with what is comfortable for you.

One clue to this question is that Microsoft certainly cares what browser you use. The gorilla from Redmond was so spooked by the enormous success of Netscape that it launched ferocious assault on it.

The browser is the next OS. Google knows this hence ChromeOS Netbooks. The browser is the gateway to the cloud and once all your apps and data reside in the cloud you won’t need Windows 7, 8, whatever number. Sure the cloud is not a reality now but that won’t be the case 10 years from now. Google and Microsoft are getting ready for that time and if they control the gateway they are in a better position to sell users their online products and services.

In this mix Firefox in particular is important (and other browsers to be sure) because unlike IE and Chrome it is fully open source. Microsoft and Google as corporate entities are vulnerable to the pressures of creating walled gardens to push their various products. And ultimately choice is always good for the consumer and competition breeds innovation.

Another benefit given the open source nature of Firefox is that developers from Zimbabwe and Africa also have an opportunity to participate in an important software project. This in itself is useful for our local technology ecosystem.

The big elephant in the room though is mobile. With mobile growing strongly in Zimbabwe and across the world Firefox’s mobile effort so far has been a damp squid as shown in tests against Chrome for Android. In Zimbabwe the dominant mobile browsers are Opera 85.74% and Nokia 6.4%. In the US Satcounter data shows iPhone and Chrome for Android account for 40.06% and 39.69% of the market respectively.

John Lilly a Mozilla board member knows this and says “What I worry about, the scary part is that for the first time the (mobile) platforms and distribution (by Google and Apple and) are tightly controlled before innovation has really started”

So will Zimbabweans and Africans in general continue to support Firefox? I suppose in the end the answer is rather nuanced. If our user preferences habits remain the same i.e we largely access the Internet by desktop through Internet café’s then our growing support for Firefox will continue. But if we know anything about technology it’s that nothing stays the same. So as Internet speeds improve and we migrate to more mobile usage Firefox’s value in the market may diminish. I suspect that as we demand that richer online experience a browsers HTML5 compliance will become more critical and in this regard, so far Chrome is head and shoulders above it’s rivals. My projection is that in the medium term Chrome has better prospects given it’s HTML5 advantage and strength on Android, but the future has been known to make nonsense of many tech predictions!!

* Based on weekly usage statistics for 14-20 May 2012 for computer browser usage of all versions of each browser.