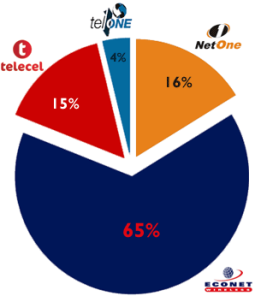 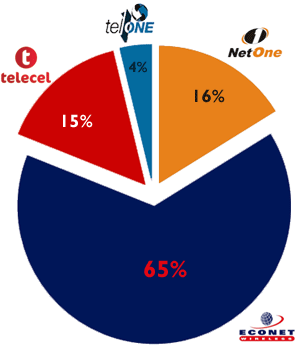 We just got the latest mobile network and fixed line operator subscriber stats from the Postal and Telecommunications Regulatory Authority of Zimbabwe (POTRAZ) for March. The stats cover the year’s first quarter. There are two notable changes since the last time POTRAZ released the country’s telecoms subscriber stats: the tele-density has risen to 78.8% and Telecel Zimbabwe has lost some subscribers.

Econet, the largest telecoms firm in Zimbabwe, added on 714,000 subscribers in the period and still leads the mobile operators with 6.4 million active subscribers. NetOne is now second with 1.6 million subscribers having added 144,000 subscribers to the 1.456 they had in December 2011.

The state owned fixed line operator, TelOne, not surprisingly increased their subscriber base this time. By some 35,119 subscribers. The new subscriptions are likely being driven by the low cost ADSL broadband being offered by the operator. An active landline subscription is required to access the broadband service.

A country’s tele-density measures the number of active mobile phone SIM cards and landlines as a percentage of the country’s total population. Currently, the POTRAZ stats  don’t include the new VoIP and CDMA operators like Telecontract, Africom, Gigatel and Brodacom that have all launched telephony services.