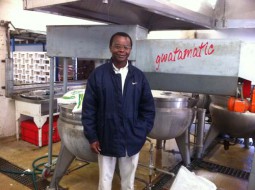 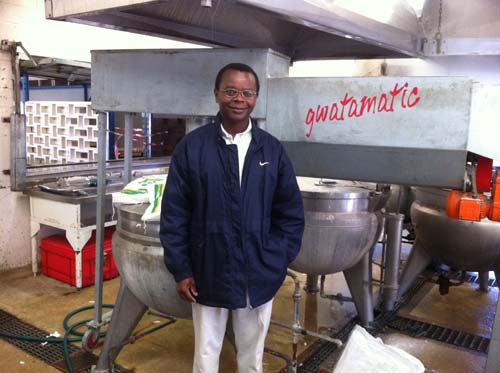 William Gwata next to his iconic machine

The Gwatamatic 2000 is purpose built for large industrial catering operations. The site we visited in Willowvale (an Industrial area inHarare) had one unit of the Gwatamatic 2000 in a four pot configuration, a kitchen staff of seven and every day the company feeds more than 1,000 employees in its canteen.

The machine has 3 basic units:

Each cooking cycle is 45 minutes long reckoned from the time the water boils to the point when the sadza is ready for dishing. To understand how the machine works it’s useful to have an appreciation of various stages involved in cooking a pot of sadza. These are (i) Water boiling, (ii) Porridge stage/ dissolving lumps (ukuphehla/kupambira), (iii) first simmering (ukuxhwata/kukwata), (iv) final thickening, (ukubonda), (v) Second Simmering (ukujiya/kushinyira). The control unit is programmed to manage and run through each of these stages.

Unlike in the manual cooking of sadza the Gwatamatic injects dry maize meal directly into boiling water. Lumps do form but the impeller (uphini/mugoti) is designed to break them all.

Hygiene: The machine is designed to avoid any direct contact between the cook/operator and the cooking and cooked sadza.

To avoid any possible contamination from hair, sweat or other foreign bodies the pot is completely closed during the entire cooking cycle. The impeller (uphini/mugoti) has a quick release coupling that allows the operator to detach it from the driveshaft and move it if necessary to the next pot or for cleaning without making contact with the cooked sadza.

Mobility: The dispensing unit is fixed to the floor on one end and mounted on wheels at the other end to enable the operator (once they have decoupled the mugoti) to free up the space above the pot and enhance accessibility for dishing out of the sadza and cleaning. The mobility of the dispensing unit also allows several pots of sadza to be cooked in succession. This allows the kitchen the ability to have a batch production schedule. They could even cook meals on a 24/7 basis.

Let’s look at each component of the machine turn.

The Maize Meal Dispenser: The maize meal is fed from this unit at the start of the cooking cycle after the water has boiled and later when the sadza needs thickening after the initial simmering (ukuxhwata/kukwata) stage. The dispenser is basically a hopper with a turning screw worm at it’s base. Once filled with maize meal the turning screw, depending on the stage in the cooking cycle will then rotate and move maize meal into the pot. An interesting feature of the dispenser is a ‘Bridge Disruptor’ which is a turning rod in the dispenser and it’s function is to ensure the screw worm is filled efficiently. Gwata developed this innovation when he realised that there instances when the moisture content of the maize meal tended to be out of spec causing it to clump above the turning screw in a manner that interfered with its flow. To ensure the safety of the operator and to keep out foreign objects the dispenser has a sieve over the hopper.

The Pot: This is where the sadza is prepared and like a giant version of the classic kumusha 3 legged pot (potjie). With the Gwatamatic 2000 it has a capacity of up to 500lt and 250lt for the Baby Gwata. Steam or electric heating methods are available for the two models with an upper volume limit of 250litres for the electrically heated vessels. Gwata pointed out that steam had superior efficiency with the larger units as it took 8 minutes to boil 500lt of water versus 3 hours to boil 250 litres using electrical elements. The steam system requires a boiler unit (which is an additional cost). The pot is fitted with a double cavity into which the steam is pumped under pressure. The steam condenses on contact with inner surface (as the water in the pot is colder), upon condensing, latent heat is transferred into the pot bringing the water to boil and cooking the sadza.

To appreciate the cooking process have a look at this video

The pot will take 95kg of maize meal, but that quantity also depends on the quality of the maize meal. Larger quantities of poor quality meal are used to achieve the same consistency in sadza.

The Gwatamatic is equipped with a sensor enabling it to cook sadza to the same consistency every time, whatever the quality of the maize meal used.

The sensor works by calibrating the relationship between the viscosity of the sadza and the amount of power pulled by the motor. This is determined by the resistance the impeller/mugoti encounters as it turns in the sadza. The greater the resistance the greater the viscosity which in turn draws more power from the cicuit. The control is in effect a feedback loop that monitors the power being drawn and this is how it delivers exactly the same consistency in the sadza.

This innovation however was not built into the early versions of the Gwatamatic but came about as a result of adversity. Gwata’s initial machines simply had a predetermined duration for the feed cycle. But whenZimbabweexperienced food shortages and maize meal of widely varying qualities was all there was, the original calibrations became unreliable. The answer was dynamic feedback loop control.

Another innovation that has come out of constant iteration is the impeller (mugoti), which Gwata says is the one component that has consumed the most time in developing and in fact is constantly under development. He notes that the fundamental determinant in the mugoti design is a balance between its hydrodynamism and the turbulence it creates. If it’s too hydrodynamic it will fail to mix the sadza well, and if it’s too busy it creates excess turbulence and draws excessive  power.

So how many people does a single pot feed? Gwata notes that figure depends on the type of work done by the food’s consumers; it would be 500 if they do heavy manual work (as at the site we visited) and 800 for office workers.

For the corporate bean counters the Gwatamatic has a really cool feature, it automatically counts the number of pots prepared. 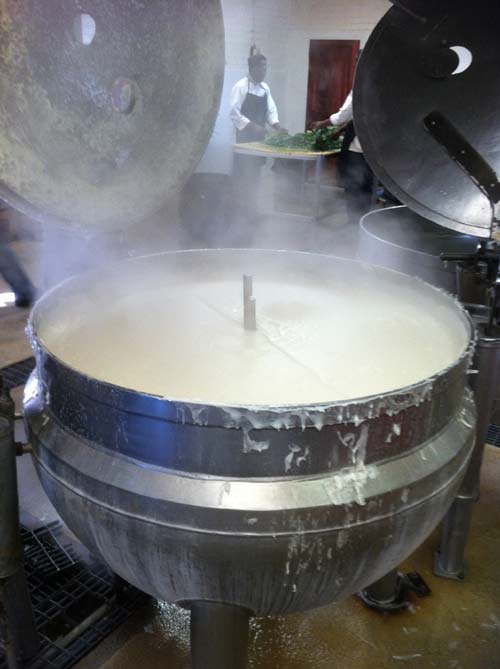 A pot of freshly cooked sadza

Show me the money!

As indicated in Part I of this article Gwata basically sells an idea, the question is what is the business model of selling this idea. Over the years the business model has evolved. Initially he charged his customers per cooking cycle. Since each control box has a counter that records the number of pots cooked he charged per pot/ month. This model worked well until hyperinflation struck, and suddenly he found that he needed to adjust the pot price every hour!! This caused a billing nightmare and in the end he simply decided to sell each unit outright. This is the model he has continued using and which administratively is easier to manage.

The Baby Gwata seems to be growth area for the business as there is robust demand from boarding schools where terribly cooked sadza had become the norm. During the hyperinflation period demand from customer category was almost non-existent, but with the advent of dollarisation schools now have much more financial leverage and are able to purchase the machine. Gwata notes that schools realise that it’s a solid investment when they realise that say when they purchase a bus for $200,000 odd the vehicle in instances makes 3 trips per week, whereas with the Baby Gwata they have an asset that is always working everyday.

The baby unit is perfect for schools from a capacity perspective and although it requires some additional manual attention offers value for money.

Will there be a Gwatamatic in your kitchen soon?

The one point we kept getting from our readers when we first wrote about the Gwatamatic is when is the kitchen ready unit coming.

As Taurai Chinyamakobvu says, “if William is serious, (he) should put some time into it, to miniaturise it. There are two major reasons why he should do that. 1. There are not many industrial operations on the market that cook sadza to warrant them investing in that machine (depending on the cost). The essence of business is selling more of your product, so he certainly cannot sell much.  2. Miniaturising that machine will make him sell it to households, which would be largest market for him, not only inZimbabwe, but also in Southern & East Africa where they all eat sadza”.

Gwata himself acknowledges there is a need for doing this as this represents the ultimate business accomplishment. He however notes that the effort required to miniaturize it is huge. To justify such effort the final product has got to deliver more than just one dish. He is working on a machine that cooks more than just sadza. A Universal Cooking Machine as he calls it, a machine whose geographical footprint would be global rather than just regional.

When I presented it to him that he may achieve a much shorter time to market if he adopted an open hardware approach, where he as the patent holder of the core design invites others developers to improve the machine and any final product sold based on his design would earn him a specified royalty; his response was that the approach would make sense when significant economic value had been established in the prototype. Before then he contended, it would be difficult to place value on each additional piece of innovation.

Gwata envisages a future where the business adopts a very IT model with a split between the hardware and software components of the business. In Gwata’s future there will be licensed manufacturers of the actual hardware.

Gwata says the current Gwatamatic model is like the pocket calculator which comes preloaded with software and can only do one thing. The proposed universal cooking apparatus will be like a PC, which comes with no application software but can obey any instructions. What the machine cooks will be determined by the recipe software that is loaded onto it. So there will be a Gwata Recipe App Store much like the Apple and Android stores.

This will not only offer immense opportunities for app developers but also for the culinary geniuses who actually concoct the recipes. This could be anyone such as the lady in the village who has her own outstanding recipes but is currently not empowered to market that expertise widely

Certainly this is a compelling future when mbodza and mapundu will have been banished by the push of a button. Gwata’s story is one that is an inspiration and filled with lessons not just forZimbabwe’s technology entrepreneurs but the world over.

To read Part I: William Gwata, an entrepreneurs journey

To check out more photos check our Facebook Page

Operator checking on the cooking cycle 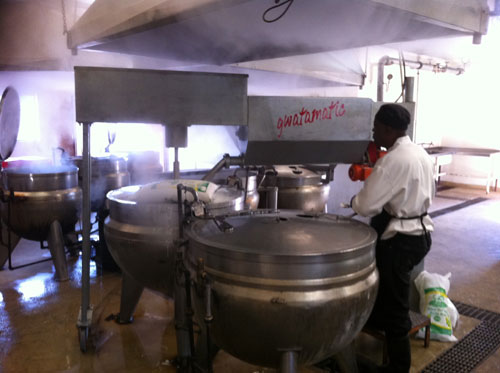 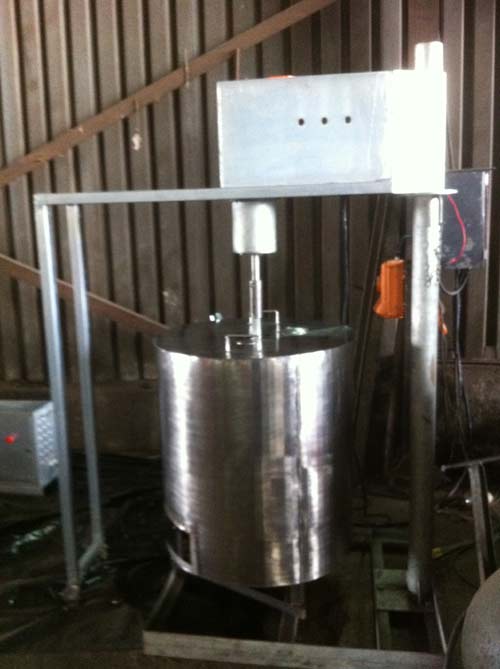 Manufacture of  the Baby Gwata 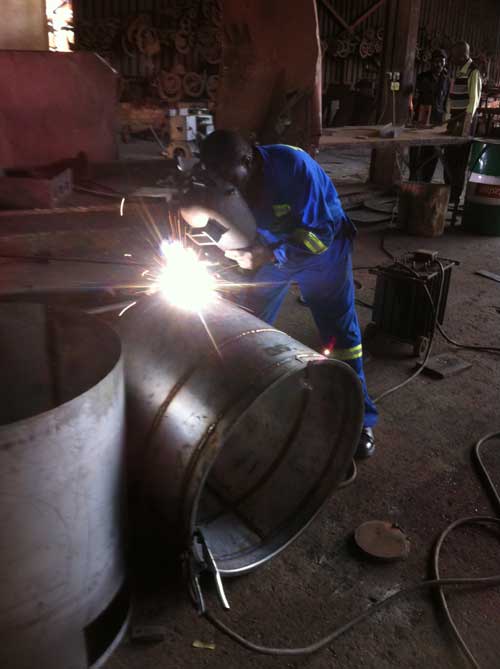 The author with crust lifted from the sadza pot 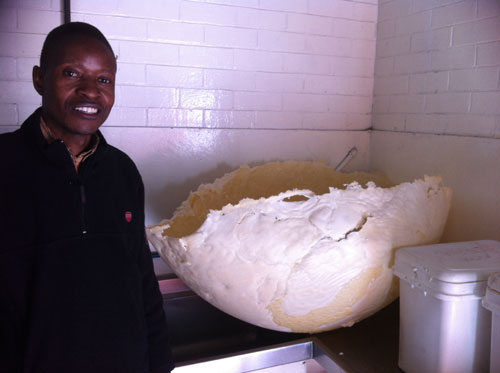