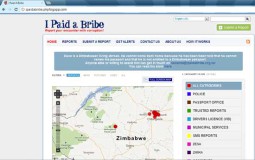 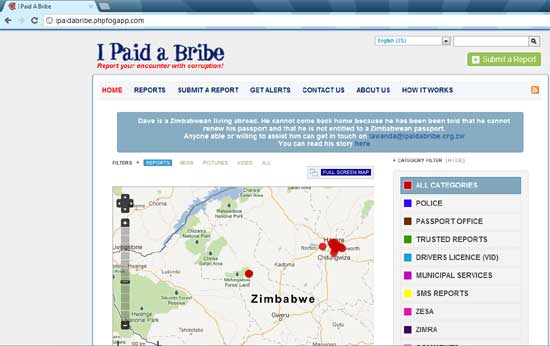 Local developer Tawanda Kembo has setup Ipaidabribe, a website dedicated to uncovering corrupt activities in Zimbabwe, particularly the payment of bribes. The site was motivated by an encounter Kembo had with a police officer. Kembo says he was delayed and frustrated after being stopped by traffic police in an attempt to get him to cough up.

The goal of the Ipaidabribe website is twofold, firstly to collect as much information from members of the public about incidents of bribery. This Kembo hopes will discourage both parties who are involved in the perpetration of the crime. Secondly, the information and statistics collected from the site will be taken to “the relevant authorities” urging them to take action and to put in place the relevant systems to curb the vice.

Clearly there is value in urging citizens to become more proactive in combating bribery which has now become endemic. Ipaidabribe features the usual suspects of institutions where one may be solicited for a bribe. These include the police, passport office, vehicle inspection department (VID), municipal services, ZIMRA, ZESA among others. In response to alleged incidents of bribery, Harare has witnessed strikes by kombi drivers protesting harassment by traffic police. These incidents have been reported in the Daily News and The Herald.

In response to this public furore news reports spoke of the government removing traffic spot fines in an effort to curb bribes at police roadblocks. It was later revealed that the government was simply debating the issue but not removing them.

After putting up the site Kembo’s plan was to keep it below the radar as he worked to perfect its functionality. But as the saying goes ‘Life is what happens to you while you’re busy making other plans’ and indeed life happened. A report in Newzimbabwe featured a video from Ipaidabribe purportedly showing a police officer receiving a bribe. Hits to his site immediately skyrocketed.

Ipaidabribe is an Ushahidi implementation and kembo says he’s built an app to allow sms submissions to be made, for those who have no Internet access or where access is limited. The app has since been submitted to the Forgetmenot App challenge.

An obvious concern is about the authenticity of submissions. Kembo says that submitters are encouraged to provide their name and email as a means of encouraging transparency. People are also unlikely to make false submissions if they append their name. He then makes every effort to verify each submission. Clearly, however this is not foolproof but it may reduce or minimise fake submissions. The other obvious issue then becomes that some submissions are not provided anonymously simply because people prefer anonymity in such matters.

As the service is picking up Kembo intends to bring someone to assist him with managing the service especially the social media aspect.