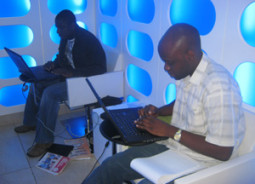 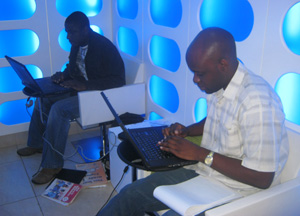 This weekend witnessed the exciting finale to the Forgetmenot eTXT Apps Challenge (16 – 17 June 2012). The finals featured seven teams of developers three of whom had travelled from outside Zimbabwe’s to participate in the challenge, namely from South Africa and Zambia.

The challenge which was organised by Forgetmenot Africa (FMNA) who are based in Peterborough, UK; Econet Wireless, Jumpstart and Techzim is a platform designed to give local developers an opportunity to create and showcase their products. The focus of the challenge is on mobile apps that leverage the FMNA platform and Econet network with an emphasis on mass adoption and use of social media. Judges for the event where Jeremy George (CEO, FMNA), Leon de Fleuriot, Chief Commercial Office – Broadband and Tatenda Furusa – Jumpstart Member

The judging was conducted on the second day of the event and each team was given 15 minutes to present and provide a LIVE demo of their product, something which all the teams save for one managed to do. In fairness the team who were not entirely ready had a working prototype that worked well in the sandbox.

The following is a summary of the projects submitted from the point of view of the developers:

Concept: This is an sms based app that primary school students and their parents can use to interactively improve their maths skills. Students are able to use the application to request questions by level or topic and get a solution. The questions are obtained from past exam questions testing key concepts in the curriculum that include: number theory, decimal numbers, number sequences, probability etc.

Concept: Allow mobile subscribers to easily browse and apply for jobs. MOJO has partnered with a local employment agency to deliver the service, tapping into their data store of CV’s and complimenting their website.

Concept: The SMS dictionary allows users to search for short sms lingo and provides definitions for listed words. In addition users are also able to submit their short words and definitions via sms

Concept: Shambadza is a shona word meaning “make known” or say out loud. Shambadza is a mobile based platform that allows companies and individuals to advertise their products and services to mobile users. Mobile users can search for items by sending search terms to the Shambadza platform.

Concept: Ipaidabribe.org.zw is an anti-corruption website which allows the public to anonymously report corruption and bribery. These reports are then displayed online for all to read. It also has a map showing the number of reports received in a geographic area. The app allows reports to be submitted using SMS to the website.

The judges felt that the winning app was mTutor had the most compelling user experience, a clean logical flow in terms of user registration and use of the app. The app also demonstrated strong social media potential as users can compare their maths scores with friends and peers. Also in a country that highly values education it was also felt that parents and education regulators would find the app attractive.

The mTutor team also participated in last years Startup Challenge though they didn’t win, their persistence (and sleepless coding nights) paid off this time as their first place finish saw them receive US$2,000.00, the new iPad and $100 worth of Econet airtime. The other top places were filled by Mojo, SMS Assistant and Musikawedu who respectively finished 2nd, 3rd and 4th and received prizes of a wireless modem and $100 of airtime.

The biggest though for all the participants is an open invitation to pitch their products before the Econet VAS team, an opportunity that otherwise might have been impossible to get.

In his remarks FMNA chief executive Jeremy George noted that the work that had been presented at the App Challenge was of the highest order and compared favourably with what he had seen in Kenya which is the darling of western media and Silicon Valley.