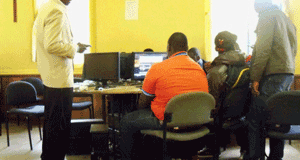 The other day, my sister’s little son was late getting home from school. You see he’s one of those kids that have to take two “kombis” on each leg of the school trip. So he first goes into the CBD connects to his school and vice versa when going home. After school he’s usually back home by 3pm but on this particular occasion he got home around 5pm. Needless to say when my sister found out she was not too pleased.

On further investigation it turned out the young man had done what virtually every young urban boy does. He was playing video games at the Joina City complex and, not surprisingly, had spent every last penny. As much as I shared my sister’s parental urge to instil discipline I could so relate to the adventure. As a high school kid in Bulawayo, I would dash across Matopos and Hillside roads to spend a couple of hours in a fantasy filled world at the Eskimo Hut gaming arcade playing Elevator Action, Gyrus and Pacman. I was not fortunate enough to afford a portable game so this was the best I could do.

Where are the arcades?

The Joina City arcade however has a lot of old style video games and only 3 PCs with plasma screens. The proprietor claims they hold monthly Fifa12 tournaments but not sure how many participants they can fit in given the few machines.

Another place that holds regular tournaments, weekly in fact, is CS Games Café which holds tournaments every Sunday. Tournaments feature games such as FIFA 12, Call of Duty Modern Warfare, World Of Warcraft, Left 4 Dead 2 etc. Cash prizes are offered to the winners, but from our observations the greatest thrill or ‘pull’ for the gamers is the social dynamic of engaging your peers in an activity you are all intensely passionate about. If you are a skilled gamer though don’t quit your day job, because the prize money of $30 will not place you in the league of professional gamers were winners take thousands of dollars per tournament. The rise of professional gaming ‘athletes’ represents the ultimate validation of gaming as more than just, well games.

Other places that had gaming facilities in Harare have closed. The massive Internet café at Cabs Centre along Jason Moyo Avenue had an excellent gaming facility but this vanished when the café shut down and the same applies with other Internet cafes like Chuweb that was located along Nelson Mandela.

It’s not all fun and games

Playing games may be all about fun and kicks but the gaming industry is serious business. Hollywood maybe more glamorous but in the entertainment business the big bucks are in gaming. The sheer size of the gaming market is the major reason why Microsoft a company that had built its fortune selling productivity software on the PC decided to get into gaming, an industry that offered compelling growth prospects given that sales from the mature Windows and Office products flat lined.

The centre of the world’s gaming universe is in Asia. China, Japan and S. Korea are the 2nd, 3rd and 4th largest market respectively. China is the largest online gaming market and companies like Shanda Interactive and Changyou are major publishers and Japanese titans Sony (Playstation), Nintendo (Wii, Gamcube) and Sega (Dreamcast) are major global players.

Since Sega’s retreat from the console business there are now 3 major console makers Sony, Microsoft and Nintendo. Despite being the smallest of the 3 majors Nintendo has cult like following. It’s a gamers gaming company epitomised by it’s creative genius Shigeru Miyamoto. Talking about the addiction of Nintendo’s games one gamer Paul Vuntarde said “Try playing any of the Wii games with friends and you will soon realize why people fail exams” adding “You find that when you play Nintendo games the character moves in the way you would like it to, the movements are fluid, intuitive and employ common sense.” Which he said is unlike Playstation or Xbox games whose pads are also not as ergonomic as Nintendo’s, “The Playstation pad actually makes your hands sore, You literally get cramp  yet with the Gamecube you will notice that the buttons are positioned in such a way that the action button is the biggest on the pad, so intuitively you hit that one first.”

Consoles however are no longer the only major game in town. The advent of broadband Internet in some analyst’s eyes is turning the console into a thin client. In China games played over the Internet mainly MMORPG (Massively multiplayer online role-playing game) are played via the net and have displaced consoles from the lead position. The explosion in Internet games has been driven by social conditions of urbanisation and the one child policy. Shanda’s games are so popular (video) that when players lose their avators the only way to reclaim them is by travelling to the company’s HQ in Shanghai. This process is done only on Monday’s and every Monday there is a queue of sometimes hundreds of people who have come from all over china to reclaim their characters.

So you want to buy games, where do you go? The bulk of the games available in Harare are sold at Flea Markets in Harare’s CBD, Avondale Shopping Centre and Sam Levy’s Village in Borrowdale. These are the prices you can expect to pay:

Gaming in Zimbabwe seems to be primarily console based and in the home. This is simply an anecdotal observation based on the prevalence of game sales in the informal market. It’s hard to tell which is the most popular console or games. The vendors at the flea markets say that their customers tend to prefer Sports and Action games, citing titles like Need for Speed, Mortal Kombat and the FIFA franchise as being some of the most popular. For top games like FIFA 12 you can expect to pay $100 but this being the informal sector prices are highly negotiable. The less popular and older titles retail for around $40-$50.

The informality of the Zimbabwean gaming environment is further shown by the lack an official distributor(s). The lack of a distributor also means that there is no support available to gamers and they have to rely upon their wits to repair and accessorize.

The upside of lacking an official distributor ironically is best shown by the immunity of local gamers to the effects of Sony’s infamous security breach of its Playstation Network resulting in theft of sensitive customer information and details.

The embracement of electronic games is one positive indication about the acceptance and adoption of a technology culture. An electronic game savvy population also is a technically savvy population. This can only be good news for the development of a nation. The people who play only games tend to have a deep appreciation of the technical aspects of the devices and they use. The gaming culture tends to spawn amazing technical creativity and fun as shown by how techies have explosion in Kinect hacks (slideshow). It is not accidental that countries with top electronics’ companies are also top gaming nations (USA, China, Japan and South Korea)

Dana Boyd, a Researcher at Microsoft Research says that online spaces provide geeky kids with a safe and space to express themselves as they can connect with people who share their interests and geeky tendencies, regardless of how old they are or where they live. These tend to be socially ostracized teens, and the Internet affords an opportunity to be taken seriously.

On the other hand games have been accused of being addictive and promoting violent and deviant behaviour. There is scant scientific evidence though that there is a causal relationship between playing games and violent acts. It should also be noted that a lot of games are casual and social in nature.

14 thoughts on “Zim gaming not much fun”