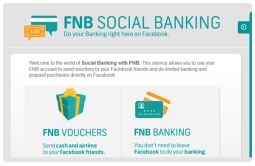 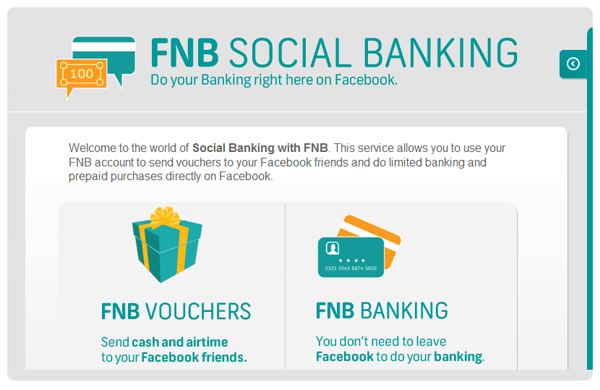 South Africa’s third largest bank by market capitalization recently announced the newest in their impressive suite of value added services  dubbed FNB Social Banking. The service allows FNB customers to check their balance and bank statement, buy airtime, sms bundles, data bundles and Blackberry vouchers all from within Facebook. They join just a few other banks globally that have seen the potential to retain customers & earn new ones in a very competitive environment by tapping on the already established Facebook app ecosystem.

In an interview with Gugulethu of Money Web South Africa, Malebo Phahlamohlaka who heads FNB Mobile Banking said in phase two of the roll-out customers will be able to send vouchers to friends (smells like ZunguZ) for their birthday say and phase three will allow payments of bills & other higher level transactions from within Facebook.

All lights are green for FNB to tap into social media especially considering that they have over 150 000 followers on Facebook.  The Citizen online quoted  a Forrester report which showed that about 42% of online adults on social networking sites were interested in engaging with their financial providers while using the social media platform. Not exactly a high figure and but good enough nonetheless.

The main concern with the service is security. A look at PC World’s “WorstSecuritySnafusof 2012 sofar” shows just how serious and costly the breaches are, with Facebook, LinkedIn, Banks & prominent online retailers being on the list. Malebo assured:

.. security is something that is always very important to us, so it’s something that we always look at first and foremost before we roll out any functionality to our customers. So we had a look at the security architecture of Facebook and, together with our strengthened security architecture of the cellphone banking we’ve been able to provide the service in a way that will make sure that the customers’ banking is very secure. So customers have nothing to worry about in terms of their banking being compromised in any way.

When you look at it, what else could they say? Their platform can only be as strong as the Facebook platform under it. A slew of malicious links such as “You won’t like Fanta after seeing this ” have compromised thousands of Facebook accounts; There’s also the “hip” browser plugins that add unofficial functionality such as changed Facebook colours and the dislike button while underneath they log user passwords. But we’ll trust that they’ll educate their customers.

FNB is living up to its title of South Africa’s most innovative bank. Recently they launched a Facebook eWallet Money Magnate game which runs till September where customers win vouchers. Last year the bank launched South Africa’s first mobile banking application for smartphones. The app has impressive features such as GeoPay which allows customers in close proximity to transfer funds between themselves. Recently the company revealed it had seen some R4 billion in transactions go through the app since launch.

Consumers aren’t the same way they used to be, they are used to high quality services and apps, and FNB at this rate is ready for this revolution in consumption where convenience wins.

Banks in Zimbabwe and the region should learn from FNB’s bold thinking and innovation. If they did, we wouldn’t have the long queues we see at the banks at the end of each month. Retailers, banks and mobile operators should work collaboratively and leave the consumer to worry about making money, not withdrawing it.