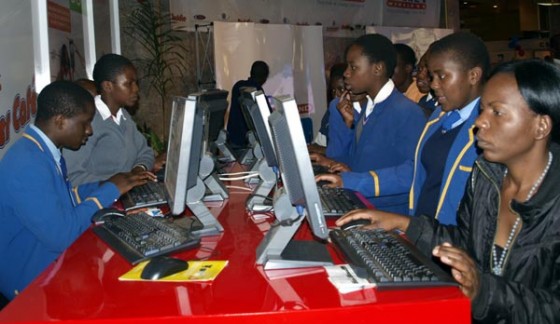 Recently President Robert Mugabe unveiled the latest school to benefit from the Presidential High Schools e-learning programme Landa John Nkomo High School at Manqe in Tsholotsho District. The school became the first in Tsholotsho to have a fully equipped computer laboratory, designed to bring e-learning. It was an occasion marked with pomp and ceremony. ICT Minister Nelson Chamisa recently told us of the government’s intention to have 1,000 primary and secondary schools benefiting from the e-Learning program by year end. Unlike it’s predecessor the Presidential Computerisation Programme the current program has a strong Internet component. The challenge for the schools once all the fanfare dies down is that the facilities are in danger of being unused, misused or abused.

We recently caught up with a team from Zimbabwe’s Eastern highlands who are doing their bit to ensure that this undesirable fate is not fulfilled. The Manicaland Association of ICT Professionals (MAIP) is a non-profit organisation of professionals who are serving as ICT evangelists and facilitators in their province. MAIP are an example of the foot soldiers battling in trenches to ensure that Zimbabwe’s effort to become an Information society becomes a reality.

The organisation was formed by young IT professionals and entrepreneurs in an effort to provide a platform for a public private partnerships in Mutare and Manicaland province. The brainchild of Hasha Maringe, the founder and CEO of Cyber Business Solutions an IT solutions company that employs 8 people including 5 computer technicians. Maringe an ICT and Electronics graduate from the Chinhoyi University of Technology led the formation of the association in December 2010.

The official launch of MAIP took place on the 29th of July 2011 and according to Maringe, the Ministry of Information & Communication Technology (MICT) support gave the organisation credibility among IT professionals and by the end of August had about 29 subscribing members both individuals and corporates had joined. Annual membership subscription is $25 for individuals $60 for corporates. This partnership with MICT resulted in MAIP leading events (Video) for the national ICT week in November 2011.

In 2012 the association decided to focus it’s efforts on ICT education after realising that there was a strong need for skills impartation. To this end on 29-30th of March MAIP held a forum for ICT Teachers in Manicaland under the title “ICT Sensitisation and Awareness Program” to ensure ICT users make use of computers provided under the e-learning program are sufficiently utilised. This was after it had been brought to the association’s awareness that a significant portion of these machines were idle and in certain cases locked up and other in bad repair.

Maringe notes that there was also a need to change the mindset and attitude of those entrusted with the computers to ensure their optimum use. They realised some of the teachers in charge of the equipment are not that well trained in IT matters and most do not hold an IT related qualification. As MAIP began to engaging with teachers they found that HEXCO (Higher Education Examinations Council) and ZIMSEC (Zimbabwe Schools Examination Council) offered curriculum material they could use, however teachers preferred that offered by the former. According to the Ministry of Higher Education’s website HEXCO courses are offered at all Polytechnics, Industrial Training Centres, Youth Training Centres, some Secondary schools and Private colleges.

The first workshop conducted by MAIP trained 87 teachers who had been drawn from schools with computers that had received IT equipment from the first Presidential Computerisation Programme. This represented 65% of teachers in the catchment area. From this exercise MAIP learned that Headmasters were  a “stumbling block” as they were “locking up computers”. It turns out that the headmasters’ fear was really about self-preservation. They feared for their jobs if the computers were stolen or vandalised. In some instances it was inertia, lack of labs or lack of teachers. Also, in some cases there were conflict between School Development Associations (SDAs) and Headmasters and this affected the computer programs.

Delegates were drawn from the Ministry of Education, Sports & Culture and headmasters and SDA members from Mutare district. Manicaland has 7 districts and MAIP has conducted training for 3 districts namely Mutare, Chipinge and Chimanimani, with Nyanga, Makoni, Buhera and Mutasa still to be covered. Mutare district saw 297 participants representing 230 schools being trained and 28-29 June Chipinge – Chimamanimani had 233 participants representing 288 schools.

Schools are now being accepted as members and they pay $150/year which caters for maintenance & support for computers and training. Additionally the association has introduced two initiatives to provide computer access to education professionals namely the “Laptop for every Head” and “Laptop for every Teacher” programs. The machines are sourced with the help of the Computer Aid International a United Kingdom based non-profit. Refurbished Dell/ HP PCs are also being sourced for schools at a cost of $150/pc through the same organisation.

Maringe notes that what has pushed the project is “passion is to see things happen, a passion not driven by theory,” but by what needs to be done on the ground and this work has been inspired by examples in Kenya and Rwanda. This was helped by a close working relationship with the former Kenyan Ambassador who assisted with her country’s experience on how they integrated ICT’s into their curriculum. It was out of this interaction that MAIP contacted Computer Aid. As a result of this work Holy Ghost High School in the province has received 25 PCs, 1 projector and 1 printer. A further two consignments are in transit consisting of 55 laptops for all teachers at St. Josephs High and 25 machines for Marange and these are expected to be delivered by the end of July.

Due to the success of the organisations work in Manicaland, the MICT has requested them to open a chapter in Masvingo. This development means that the organisation’s name has to be changed to reflect their new identity, a process which they initiated to formalise.