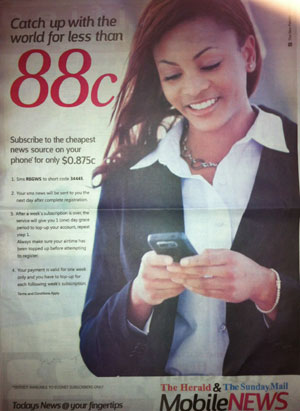 The Herald’s MobileNEWS service is now available for US 88c per week. The new pricing option is advertised in today’s (18 July 2012) copy of the newspaper.

Earlier we reported that The Herald’s Mobile News service had managed to sign up 5,000 subscribers after it’s first month of operation. This was based upon statements released by the Zimpaper’s Marketing Manager Munyaradzi Hatendi, who further noted that they were also exploring the possibility of introducing different pricing options to make it easier for subscribers and potential customers to renew purchase a subscription. Zimpapers are the publishers of The Herald.

The MobileNEWS service is priced at US$3.50 a month and the new pricing option works out to the same amount for a 4 week period. The 88c (the exact price is 0.875c) option makes it easier to ‘juice’ ones account as the $1 airtime denomination is the most commonly used top-up option and should be attractive with users. Charity Gwata from the papers marketing department noted that subscribers had gone up to 7,000 in June for July the figure was slightly lower as users sometimes lapsed on their renewals. The introduction of the 88c option was therefore designed to ensure that subscribers wouldbe encouraged to renew their subscriptions. After the week’s subscription is over the service gives the user a one day grace period to top-up the account.

She further revealed that Zimpaper’s is still on track to introduce the service to their other titles such as H-Metro, The Chronicle, Kwayedza etc, but this would be done once they were happy with the performance of the current product. Another development the news company is working on is expanding MobileNEWS to other mobile mobile networks namely Netone and Telecel as it is currently available only on the Econet network.