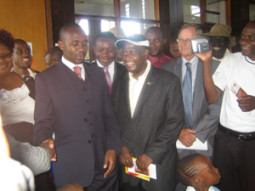 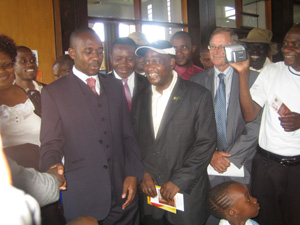 Yesterday, 24 July 2012, the National ICT Policy consultative meeting was held in Bulawayo and it was a somewhat charged affair. The man running the show on behalf of the Ministry of Information & Communication Technology (MICT) is a consultant from the Ministry of Justice, a Mr. Mukarakate. He is a lawyer by profession and he is supported by two technology guys.

Several issues came up, of which this article will touch on a few as a means of highlighting the thrust of the deliberations. Firstly, the draft presented by the chair proposes the set-up of an e-Government Agency. Attendants were not happy about the setting up of this agency as they felt it would marginalise the role of local authorities. It is envisaged that the proposed e-Government Agency would work with various ministries and Parastatals.

One reason participants did approve of the National ICT Agency and wanted it scrapped from the document was that it adds to the cost of doing business in the ICT sector which is already high. With respect to the NICTA, the Chair was adamant that the body would remain in the draft proposal.

During lunch time, at the table that this author was present at, the consensus was that the panel already had the final draft they want to present. So even the suggestion that removing NICTA was moot as it appeared the decision was already made. In the writer’s view the NICTA proposal is a reflection of the politics of Zimbabwe. The main political parties, in the power-sharing agreement, have split roles as one heads ICTs while the other heads media. So as the political fights go on, it is obvious one entity that will have more power covering broadcasting and ICTs would centralise power in the hands of the party that gets its grip on that entity.

It’s the Hegelian Dialectic all over. You think they want it because of convergence of technologies but in fact, it has serious political ramifications, especially in Zimbabwe. While you may think this proposed NICTA is all about ICTs and their development, it remains to be proven so.

In my view NICTA is a waste of resources and should not be supported. BAZ and Potraz are less than 10 years old and starting a new combined entity that will behave as, and is akin to, the revival of the old Posts and Telecommunications Corporation (PTC) is something all pro-development ICT players must not support, and is akin to the American Stop Online Piracy Act (SOPA) Bill and harks back to the Strive Masiyiwa versus the PTC scenario.

An interesting revelation was when the Chair showed ignorance of ICTs even asking what “Open Source” software is. Possibly because of his legal background his appreciation of ICTs was not as strong as it should be and he did not seem to go beyond ordinary tech knowledge like sim cards [he said he bought his for $100 (it was not clear whether this was ZW dollars or US) and are now available for US$0,50]. The real debate about open source software and ICTs never took place. A representative of the Computer Society of Zimbabwe (CSZ) defended commercial software from Microsoft and opposed the donating of computers with free open source software. Clearly CSZ has vested interested considering that the guy even said their organisation represented the interests of the computing industry.

Sadly, the impression was that the Chair and his two technology advisors were opposed to open source software, which opened a can of distrust and destroyed much credibility of the exercise. This is one of the points among others that led many to believe these gentlemen came to tell Bulawayo the final policy in the guise of a consultative workshop. My feeling is that the whole exercise is simply cosmetic, an exercise of just adding a word here or there, an extra line, but nothing substantive. The whole exercise is basically changing the wording of the 2005 National ICT Policy framework.

The fact that a lawyer is leading the show instead of an ICT player is serious cause for concern and he seemed keen on supporting extra regulation in the form of BAZ, Potraz, MIC and laws like Access to Information and Protection of Privacy Act as well the Interception of Communications Act.

Probably the funniest suggestion to come from the chair was the suggestion that Ecocash was a result of the National ICT Policy framework of 2005! One attendant asked if Ecocash was the result of the Policy Framework or of Econet doing what it felt was a viable business venture. The Chair suggested that Ecocash and other similar services need to be regulated as currently they were not regulated. Yet the Reserve Bank of Zimbabwe (RBZ) regulates all national payments systems and RBZ Governor Gideon Gono officially launched Ecocash. The leaning of the Chair towards greater regulation is serious cause for concern as it points to an even more onerous cost of doing business.

For example this was demonstrated in the case of e-commerce (and Paypal) which fell under item “7. Commerce and SMEs”. The Chair’s insistence on regulation was to the point that if you are a techpreneur integrating a payment method via APIs on your website, you would need some sort of licence to do this, yet, as was pointed out to him, in The US, the Yahoo! guys did not need a licence to start accepting payments via Paypal.

Regarding the absence of Paypal, the Chair said that Paypal is not available in Zimbabwe because of local regulations, which is not valid a valid argument considering that Mastercard and Visa are operational in Zimbabwe.

When it was presented to the panel that Facebook and Yahoo where started in dorm rooms and could accept payments, without a need for a trading licence; which in Zimbabwe is only given if you are operating from a building and is inspected by the local authority. It was explained to the Chair that starting from a dorm room without licencing and riding on the university’s infrastructure actually made commercialization of Facebook and Yahoo easier.

When it was hinted to him that more regulations would increase the cost of doing business, many ICT people will leave the country to start their businesses elsewhere the country is the one that will lose, the issue was left hanging because of the time limit.

One frustrated lady from Lupane said when computers are donated to rural schools, there must be consideration for the infrastructure environment there as there was a risk that donated computers turning into white elephants because there is no electricity. She noted that when computers are donated, a plan is made for a generator and as soon as the politicians have left, the computers lie idle because there is no power at the school. Her suggestion was an integrated approach including in ZESA (the electricity utility).

As the consultative workshops move round the country, it is important that people be brave enough to say their exact feelings about the content of the national ICT Policy. At the Bulawayo consultative workshop the consensus of participants was the scrapping of the e-Government Agency as well as NICTA. In the writer’s view it is important for people not to keep quiet about this issue as it will affect them in the future and they must not cry foul when it happens.

NOTE: This is a guest post by a individual who attended the  ICT Review policy consultative workshop in Bulawayo. The person asked to remain anonymous.

13 thoughts on “The National ICT review, a participant’s view”