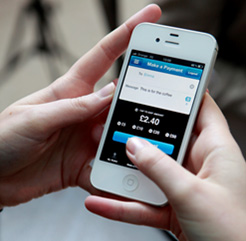 Pingit, Barclays’ smartphone mobile banking app, has been extended to Africa, with the first implementation launched in Kenya. An announcement posted on the institution’s global website says the application will be launched in additional Africa markets, including Zimbabwe, in the next couple of months.

It is an app much like the CABS textacash service in terms of it being a mobile money service run by a bank, it allows Barclays U.K users to transfer money to another Barclays customer using only their mobile number. Unlike textacash however (which works on any mobile phone), the Barclays Pingit app works on smartphones only, specifically Android 2.2+, iOS 4.2+, Blackberry OS 5.0+. It has had success in the United Kingdom, and it will be making its African debut in Kenya.

Barclays is to allow money to be sent from mobile phones in the UK to those in Kenya free of charge, as part of the international rollout of its Pingit app. Barclays will charge no commission for international money transfers; customers will therefore only incur the wholesale costs of foreign currency exchange. People in the U.K can send up to £750 a day abroad using Pingit, and people abroad can receive up to £5,000 a day.

The app is set to be rolled out across 13 African countries including Zimbabwe, by the end of the year. Provided it eventually comes to Zimbabwe it can be a major boon for Zimbabweans in the U.K who can then send money to their relatives easily, securely and, more importantly, free of charge.

Currently the available international remittance services to Zimbabwe such as Bank Electronic transfers, Mukuru.com, Western Union and MoneyGram, all charge the sender and in other cases even the receiver a fee for the transaction. When Pingit comes to Zimbabwe, these competitors will find it hard to compete with the fee free service.