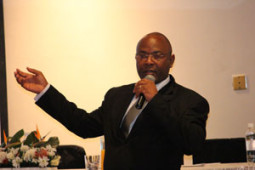 We have noted before that we are supportive of the MICT’s (Ministry of Information and Communication Technology) exercise to draft a new National ICT policy. It is our hope that the policy document produced is not just a statement of intent but a commitment to specific deliverables. More ambitiously it can even be some kind of social contract between the Government/MICT and ICT stakeholders and citizens. On Monday the 28th of July we had the opportunity to attend the Harare leg of the consultation workshops that the Ministry has been conducting across the country and this is our thought s about the events of the day

Proceedings at started at 9am and up until 12pm the ‘consultative’ workshop featured a string of speeches mainly by politicians and bureaucrats. Given the scacrcity of time to gather and capture views from participants, even if they had been given the whole day to give their submissions, this was criminal. Speeches are fine but this was not the occasion for so many of them. A  30 minute introduction and overview would have been sufficient allowing people to get stuck into the business of the day.

A big mystery was the outputs of the 2005 policy. It would have served the process to a grat deal if the facilitator and the Ministry had provided feedback about what had been achieved and otherwise from the previous policy. A detailed report and a one page summary available for download on MICT site would have done very nicely. Armed with this knowledge, contributions would have been more specific and appropriate. If the government does not know what the last policy achieved and where it fell short, what prevents the current process and policy from heading towards oblivion? This point was raised to the attention of the facilitator early on and he deferred it for later. The issue was never revisited or resolved. After hearing the submissions provided by the various groups and looking at the 2005 policy one finds pretty much the same ideas

The role of the facilitator

This point brings us neatly to the role of the facilitator. After reading a previous submission from one of our readers about the shortcomings of the facilitator, I was forewarned, but I was prepared to give him the benefit of the doubt. In their wisdom or lack thereof MICT appointed Advocate Mukarakate, a lawyer from the Ministry of Justice as facilitator of the workshops. Whilst it’s not necessary for someone to have a technical or IT background to have been a facilitator it surely was imperative that this person be well versed with technological issues and their application in the Zimbabwean landscape. It was important for the facilitator to expertly guide the discussion(s) to pertinent issues and summarise the consensus views for the purposes of capturing in the draft policy. He failed to do this. He failed to provide the forum with the outputs of the previous policy, he failed to highlight the key challenges that ICT faces in Zimbabwe.

No T-shirts and sneakers

Notable by their absence were the young irreverent innovators in their t-shirts, jeans, sneakers or slops. The rebels like William Shockley, Steve Jobs, Akio Morita, Linus Torvalds and Shawn Fanning. It’s an indictment of the process that it hasn’t captured the imagination of the guys in dorm rooms or research labs. This in no way is to say that those in suits and ties cannot innovate but there was a distinct lack of the young crop of IT enthusiasts who are a valuable part of the industry ecosystem.

It would have been Sector specific consultation would also have been useful. The ICT sector is huge; the issues of mobile networks is not the same as those of developers, or those of researchers, computer suppliers or security experts. To their credit the Ministry’s through the facilitator and Mrs Chingonzo indicated that outside the framework workshops they would consult different industry players and experts. Those who want to provide more detailed submissions were encouraged to do so by email.

It would also have been great to hear what the government itself has in mind about developing ICT in Zimbabwe. For example participating in R&D. Public funded institutions have a strong track record in making seminal contributions to tech such CERN (Tim Berners Lee), Defense Advanced Research Projects Agency (DARPA) and private facilities such as Xerox PARC (GUI, Object Oriented Programming language), Bell Labs (Unix), Sun Microsystems (Java), IBM Research (Touchscreen) etc. India, China and South Korea have also made bold public private sector investments and it would have good to get an idea of what the government is thinking in this direction. Also the government is implementing an e-government initiative. One component of the project involves the implementing an extensive SAP solution by 23rd Century Solution. Surely the e-government initiative would have been a great opportunity to harness the energy of local developers. Importing expensive proprietary solutions surely is not the way to go.

The elephant in the room is politics. This point relates not just to the Harare workshop but the whole review and drafting process. We have a government that is essentially made up of unwilling bedfellows. Will this process or the policy survive the country’s politics? Politics per se is not a bad thing nor is it an insurmountable obstacle. Policies in every country under the earth are crafted and implemented in a political environment. The policy review process comes after the failure of the ICT Bill to be enacted into law. The most contentious aspect of the ICT bill was the intention to establish a single regulatory authority combining three bodies namely

The failure of the ICT Bill was basically because ZANU PF has objected to this consolidation. The MICT has it work cut out to ensure that what the final policy looks like will be politically passable.