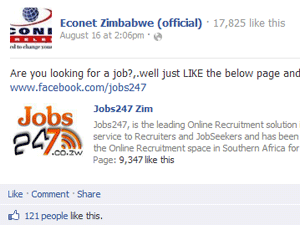 Note: There was a significant development to this story just before we published it. We decided to put the development as an update below the story.

This has happened before and will probably continue to happen as long as the unscrupulous lot walk amoung us. The way they operate is simple; they observe a successful brand that people want to engage with socially on platforms like Facebook and Twitter. Facebook particularly is a great place to get conversation going with Zimbos. So the unscrupulous one creates a Facebook page for the brand without the brand owner’s permission and goes on to tell the world that this new page is the official one.

A Facebook page created less than a month ago, but now more popular than Econet’s own page, is claiming to be the official Econet Facebook page. The claim is quite blatant actually, the page is named “Econet Zimbabwe (official)”. The imposter page has some 17,825 likes, while Econet’s page has 16,682 likes.

When we checked with Econet some two weeks ago what this page was about (just in case were wrong about its fake status), the company’s spokesperson confirmed it’s fake and that they are working to have it shut down:

Unfortunately for Econet, getting Facebook to take it down will probably take some time. See, despite the trends speaking for themselves, Zuckerburg doesn’t consider the numbers (or the potential) meaningful enough to prioritize Africa as a market. Now Africa is a big place, 1 billion+ people big. Considering Zimbabwe’s only 12.5 million of that, and much less the Facebook population, it’s no wonder these situations take forever to resolve.

It took so long for H-Metro (never happened actually) to have their grievance resolved by Facebook that the media house just gave up and let the imposters run off with the brand.

The curious thing we noted about the fake Econet Facebook page is that posts on the page are promoting websites by a company that runs the following domains and Facebook pages: www.facebook.com/jobs247, www.classifieds247.co.zw, www.health263.co.zw. (see image above). Strange they’d do it so blatantly if it’s them.

Update: Just as we were about to post this story, we decided to take a screenshot of the fake page so we would have it as the story’s main picture. We found the page had been taken down. Now, other than Econet, the only people we contacted about this page are 2 people connected to a local company called Communications247, which runs the domains mentioned above. They didn’t respond to us. I guess it’s clear who’s behind the pages now. Fortunately, we had taken some screenshots of posts made on the site.

Here are some of them: 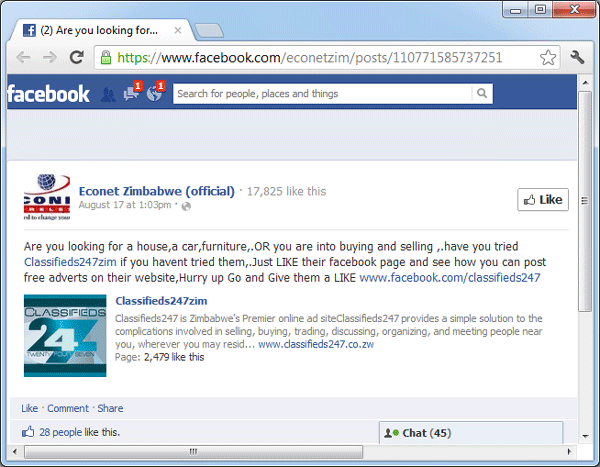 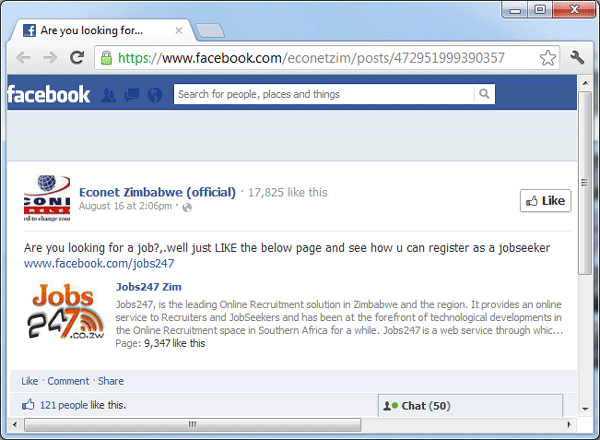 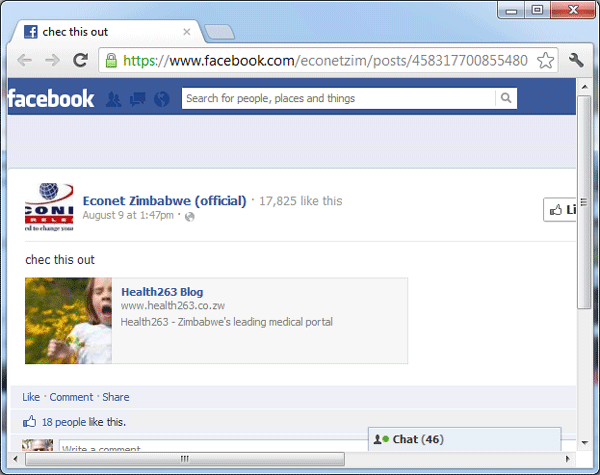 Update: We have since received an email from Communications 247 (and a comment in the comments section below), basically demanding that we take this article offline or they’ll sue. According to them someone else was using the fake Econet Facebook page to promote Communications 247 web properties. The email says the page has been shut down because they asked the person to do so. Here’s the text from their email:

We advise you to retract the malicious, damaging and defamatory article that suggests that Communication 247 is responsible for the existence of an imposter Econet facebook page. Techzim has chosen to publish this article without getting the full facts of the situation behind the story, and has assumed that by Communication 247 failing to comment in a time deemed appropriate by Techzim that it implies guilt.

TechZim has no concrete proof that Communication 247 is responsible for the facebook posting. Your story is based on conjecture and not fact. Communication 247 has concrete proof that we are in fact not responsible for the posting, and we took measures to get to the bottom of the matter to find out who in fact was. Those responsible have complied with our request to remove the page and desist from using our portals to give credibility to their cause under threat of legal action. We will take legal action and sue for defamation and malicious damage if you do not retract your article and post an apology to Communication 247 immediately. You have one hour to remove the article.

47 thoughts on “Two Econet Wireless Facebook pages. The more popular one is fake”