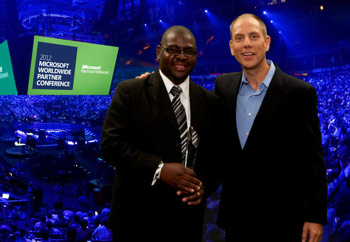 Westchase Consultants, a local ICT solutions company that develops business application based on Microsoft platforms was recognized recently as 2012 Microsoft Partner of the Year for the Zimbabwean region. Westchase founder and managing director, Mkhululi Ndlovu, was presented with the award at the Microsoft Worldwide Partner Conference (WPC) in Canada last month.

Westchase was awarded for developing their own Hospital Management Solution (HMS), a system which gives hospital employees new ways to organize work and prioritize relevant tasks, increasing productivity and effectiveness. The solution is developed as an add-on to Microsoft Dynamics NAV introducing hospital management functionality. Westchase set out to solve the problem of hospitals using islands of different databases for their records which often results in inaccurate records and a lot of time spent consolidating data.

According to Westchase mobile technology introduced as part of the solution, also empowers healthcare professionals to access patient records from anywhere in their facilities for faster decision making. The HMS is used in most of the major private hospitals in Harare and will, in future, be rolled out to other hospitals in the country. Westchase Consultants have also worked on projects in over 10 African countries.

At the WPC, Microsoft CEO Steve Ballmer is said to have described 2012 as Microsoft’s “bold bet” year ranking its product announcements up with Microsoft’s founding in 1975, its big operating system design win on the IBM PC in 1981, and Windows 95 in 1995. Microsoft this year is simultaneously introducing Windows 8 on PCs, tablets and smartphones, as well as launching the Surface tablet amoung other products