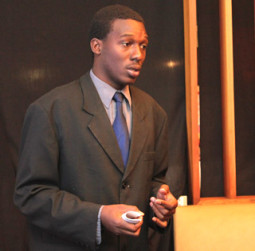 This short series of 6 articles will cover the profiles of each of the six finalists that made it into the finals of this year’s ZOL Jumpstart Challenge to be held this Friday, 14 September.

FootballZone is a website that covers local & international football news all conveniently on one platform using web and mobile platforms. It was founded by Godwin Chiparaushe  and Gift Gana, two good friends that met during their university days at the National University of Science & Technology (NUST) in Bulawayo

Godwin studied Biochemistry. He was also on track to become a professional footballer (he even had trials with a number of top flight local clubs) but ended up taking the academic route . Gift on the other hand is a Physics graduate who not only shares an infectious passion for football, but also nurtured a passion for web and mobile application development. The startup’s value proposition is founded on a foundation of addressing the burning need for local football content. It provides analysis, previews, reviews, breaking news, live match updates of local and international matches with a bias towards local football in Zimbabwe.

Footballzone came about after its two founders got fed up with the lack of “informative, in-depth, reliable and unbiased football content, especially real-time football news and match updates”. Waiting for 24 hours for national newspapers to publish match results and information proved to be a major pain point for the pair , they quickly realised that other fans were in the same boat . Most local clubs don’t operate websites, making it even more difficult to find information about local leagues.

The site is taking its focus on local football further by also providing content focused on international leagues with a local flavour.  Features of the website include club profiles, player profiles, club statistics, games and competitions, interactive features like discussion forums for fans, fan polls, an SMS football news alert service, newsletters and mobile apps based around the game.

According to the two founders, “Website popularity has increased quite significantly since we went LIVE at the end of March 2012. We starting with 1,500 page views and 500 unique visitors per month in  the 1st month and have scaled to the current figure of 50,000 page views and 25,000 unique visitors per month and increasing.” The team has managed to achieve such growth using little resources and has been propelled by a belief and passion for local football. In a demonstration of their entrepreneurial zeal, the team has also managed to attract contributors from across the nation.